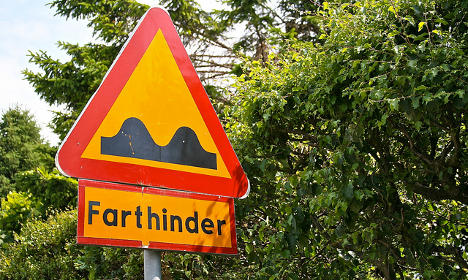 How can Swedes not giggle when they say this? Photo: Owen W Brown/Flickr

There's a clever and delightful little Swenglish play on words: “It's not the fart that kills, it's the smell.” Why is it clever? Well, the word 'fart' is Swedish for 'speed' and the word 'smäll' (pronounced smell) is the Swedish word for 'crash'. So, it's not the speed that kills you, it's the crash. If you invite your non-Swedish friends on a road trip, be prepared for adolescent humour every time you go past a police 'fartkontroll' (speed check) or drive into a carpark at the 'infart' (entry) sign. Oh, and the Swedish word for 'fart' is 'fis' or 'prutt'. Photo: Berit Roald/NTB scanpix/SCANPIX

We know that Swedes have a reputation for being sexually liberal, but if your Swedish sambo ends your phone conversations by going “Puss, puss!” it is important to remember that they are not trying to (in a frankly rather awkward manner) turn an otherwise unremarkable chat into something a little more saucy. Nor are they suddenly confusing you with a kitten.

'Puss' actually means 'kiss' in Swedish and is a common way of wrapping up a phone call or email between family members, similar to 'bisous' in French or 'bacio' in Italian. Confusingly, the Swedish word 'kiss' translates to 'pee', so beware of that one too. If a Swede tells you to meet at 8pm “prick”, don't punch them in the face. Not only because violence does not solve anything, but also because they did not mean to insult you using a vulgar English slang word. In Swedish, 'prick' means 'dot'. So when the ever-so-punctual Swedes want to meet at prick 8pm, they just mean 8pm on the dot. If you think this sounds like something famously foulmouthed TV chef Gordon Ramsay might say, you could not be more…well, right, actually. If he were Swedish, at least. Because 'kock' is just the word for 'chef'. So do try to hide your blush when your Swedish dining companion after a particularly yummy meal in a restaurant tries to pass on his or her compliments to the head “kock”. No, Swedes aren't talking about women's lingerie when you ask them how their weekend was (well, probably not, anyway). The word bra means good. So when Sven says his weekend was “bra” it doesn't mean he got any action in the bedroom. If you're Scottish you may have noticed that 'bra' is similar to the word 'braw', which also means good. The Swedish word for bra, on the other hand, is 'behå'. Photo: Malin Hoelstad/SvD/SCANPIX

Get your mind out of the gutters, folks. It just means six. Except it doesn't – it also means exactly what you think it means. It is a wonder that this one does not cause more confusion, but the fact that the Swedes somehow seem to understand when they are talking about one thing or the other shows that language is really all down to context.

Oh, of course we weren't going to show you the other one. Photo: Staffan Löwstedt/SvD/SCANPIX

This is one of the first funny words anglophone expats tend to notice when they arrive in Sweden – and it's one The Local's staff and readers alike keep giggling about even after years in the Nordic country. But no, it's got nothing to do with hookers. It just means 'end'. So a 'slutspurt' (literally translated 'end sprint' or 'final sprint') is just the final splurge of a sale in a store. And getting off at the 'slutstation' is a far less exciting experience than what you may have been hoping for.

This doesn't mean what you think it means! pic.twitter.com/XWsmhX84ub

Swap the 'a' for a 'u' and repeat that word. Yes, that's how it's pronounced in Swedish, and no, it is not considered rude at all. Why should it? It is nothing more than the word for a small compartment such as a pocket on a rucksack or a pigeon hole. A friend once told us the story of her Swedish grandmother who tried to buy a suitcase in the United States and emphasized in Swenglish to the salesperson that she “needed plenty of fack”. Coincidentally, it is also the Swedish word for trade union. Go figure.