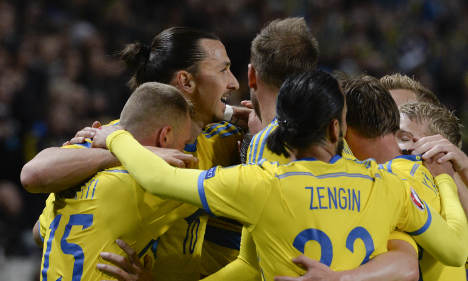 The Swedish side after their game with Moldova. Photo: Janerik Henriksson/TT
Sweden, along with Bosnia, Ukraine and Hungary, was announced on Wednesday as one of the four seeded teams for the Euro 2016 playoffs when the draw is made on Sunday.
Under the seeding system, each of the four teams considered strongest by UEFA will play one of the four other teams left in the competition in two-legged play-offs, at home and away.
So, in a draw on Sunday, UEFA will reveal whether Sweden will take on Norway, Denmark, Ireland or Slovenia.
Swedish manager Erik Hamren's side finished third in Group G behind Austria and Russia, despite the Nordic nation's star striker Zlatan Ibrahimovic scoring eight goals in qualifying.
The player, who is also the top scorer in the history of his French club side PSG, has said he does not want to miss the European Championships, telling global media this week “it's really unimaginable to me that this tournament takes place without me”.
“We have not been able to get there directly so we will take another route. Whoever we face in the playoffs, it will be difficult.”
“In these games, it is all or nothing and each team gives 200 percent but I am sure we will qualify.”
Sweden has not passed the group stages in a UEFA European Championship since 2004, when it reached the quarter finals. It has failed to progress beyond the semi-finals since 1992 and has never made it into the final of the competition.
But the current squad includes some promising young stars, some of whom helped their country to a historic win in the Under-21 European Championship in Prague earlier this year.
In all 24 teams will contest the Euro finals in France next summer – the most ever – with France assured of qualification as hosts.
The top two teams from the nine qualification groups have already scored their spots in the competition, as well as Turkey, who were the best-placed team finishing third.
That left four places to be decided in two leg playoffs, contested by the rest of the teams placing third.
The first legs will be held from November 12th – 14th with the return matches on November 15th – 17th.