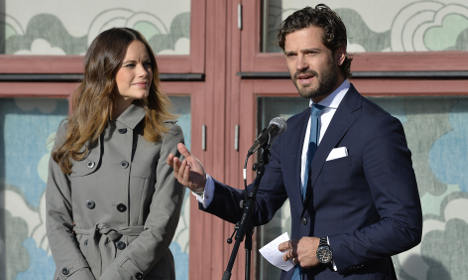 The couple on a visit to Norrtälje, north of Stockholm this week. Photo: Anders Wiklund/TT
The couple announced the news on Thursday afternoon on the Swedish Royal Court's website.
“We are so happy and excited to announce that we are expecting our first child. We are very much looking forward to it,” said a statement from the couple.
The royal court added that the birth was expected to take place in April 2016.
“No changes in the schedule of The Prince Couple's public engagements are planned during the fall of 2015,” the court posted on the site. The royal couple at their wedding. Photo: Anders Wiklund/TT
READ ALSO: How a Swedish reality TV star got a fairytale wedding
Swedish royal watchers rushed to welcome the news.
“It's always fun to have royal children, and in contrast to all the other news, this is good news,” Sten Hedman, a frequent media commentator on the Swedish royal family, told the TT news agency.
“They married last summer and they are not very young. They have both passed 30 and may want to have two or three children. So it is better to be fast at the start,” he added.
Prince Carl-Philip and Princess Sofia walked down the aisle in June in a lavish ceremony in Stockholm. Formerly known as Sofia Hellqvist, Sweden's newest royal is a former reality television star and model.
READ ALSO: Six facts about Europe's hot new royal couple
The royal couple's child will have a peer to play with as Crown Princess Victoria, the oldest of King Carl XVI's children, announced last month that she was due to give birth to her second baby in March.
The 38-year-old, who is married to her former personal trainer Prince Daniel, is already mother to Princess Estelle, who turned three earlier this year.
Her sister Princess Madeleine, gave birth to the current youngest member of the Swedish royal family in June. Prince Nicolas was baptised earlier this month in Drottningholm Palace church, just outside Stockholm.