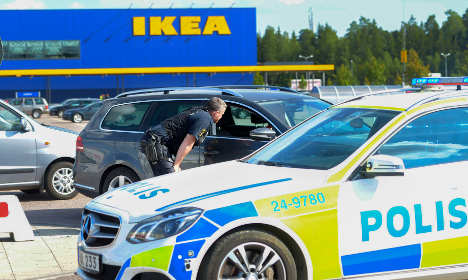 Police told Swedish media at a press conference in the central Swedish town of Västerås on Friday that the suspect was set to appear in court on October 28th.

A mother and her adult son died in the knife attack he is accused of carrying out at an Ikea mall in the town on August 10th. The suspect who also attempted to kill himself, later admitted in police interrogations to stabbing the pair to death in one of Sweden's most high-profile criminal cases this year.

It was reported at the time that the man, Eritrean asylum seeker Abraham Ukbagabir, had been handed a deportation order and had been told to leave Sweden by immigration officials a day before the attack.

He then attacked the 55-year-old woman and her 27-year-old son after which he stabbed himself.

Swedish media said on Friday that a psychiatric tests has shown Ukbagabir did not suffer from mental illness at the time of the attack, which according to Swedish law means if found guilty he will be sentenced to a prison term.

However, deputy chief prosecutor Eva Morén did not want to comment on the examinations at the press conference, saying she had not yet read the report. Morén told reporters that Ukbagabir, who still admits the attack, was distraught about having been told to leave Sweden and had been plotting to kill someone “for some time”, but had chosen his victims at random.

His lawyer, Per-Ingvar Ekblad, said that he had spoken to his client, whose physical health had improved since he stabbed himself after the attack.

“There are no excuses for this act, but hopefully an explanation and we will have to return to that,” he said.

A 23-year-old man, who stayed at the same asylum centre as Ukbagabir, and had come with him to Ikea on the day of the attack, was also arrested but was later released. Morén said on Friday he was not under suspicion and was believed to have been unaware of his friend's plans.

The Ikea stabbings stirred tension in Sweden and saw police presence stepped up at asylum centres in the Västmanland region out of fear of retaliation attacks against the Eritrean community. But the victims' family said on Friday that the did not want their loved ones' deaths to be used as a “weapon” in the debate.

“We have lost a beloved daughter and mother and a beloved son and brother. They were at the wrong place at the wrong time. This terrible incident has been used as a weapon in the media and we strongly distance ourselves from that. We do not want it to be used in the debate about immigration and integration,” read their statement.