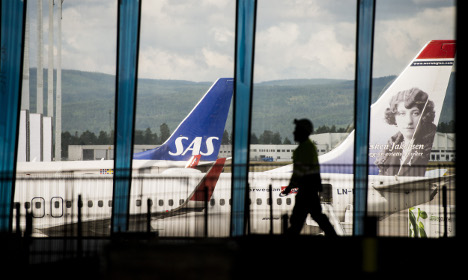 Flights from Oslo (pictured), Stockholm and Copenhagen will be affected. Photo: Fredrik Varfjell/NTB scanpix/TT
SAS said on Friday that its flights to Ankara and Pristina from Stockholm would be cut along with services running out of Gothenburg to Berlin and Dublin.
From Copenhagen, also a major hub for business travellers based in southern Sweden, it said routes to Moscow, Tel Aviv and Ankara would be cancelled in 2016.
Meanwhile Oslo-based passengers were told by the company that flights to Saltzburg and Pristina were being axed.
Trine Kromann-Mikkelsen, a spokesperson for SAS, told air industry website check-in.dk that its Moscow route has struggled amid Russia's currency crisis and Western sanctions over its aggressions in Ukraine.
“We have unfortunately had weak growth in Moscow which means that we can’t maintain it. We will keep Saint Petersburg from Copenhagen and we still have departures to Moscow from Stockholm,” she said.
The decision to stop flights from Tel Aviv came as a particular a surprise to Scandinavians, since the company only resumed journeys to the Israeli city in 2012 after a ten-year absence.
“Tel Aviv is an expensive route to operate in stiff competition and we don’t have a sufficient profitability to keep it. We can also see that political instability is affecting the route,” Kromann-Mikkelsen told check-in.dk.
But the news from SAS wasn’t all bad. The airline said that in addition to the new direct flights to Boston, Krakow, Reykjavik and Vienna from Copenhagen announced earlier this month, it would also add a summer route from the Danish capital to Faro in Portugal as well as one from Aarhus to Palma de Mallorca.
SAS, which is partially owned by the governments of Sweden, Denmark and Norway, has also recently introduced new routes from Stockhom to Los Angeles and Hong Kong and to Miami from Oslo and Copenhagen.
It has spent the past few years struggling in the face of growing competition from low cost airlines, including Ryanair and Oslo-based Norwegian, Europe's third-largest budget carrier.
But in September it announced its pre-tax profits were 30 percent higher this summer than in 2014 and said the firm had celebrated its best July for a decade.
Last month, Norwegian revealed it was looking to add routes between Copenhagen and São Paulo, Rio de Janeiro, Buenos Aires, Delhi, Mumbai, Cape Town and Durban.