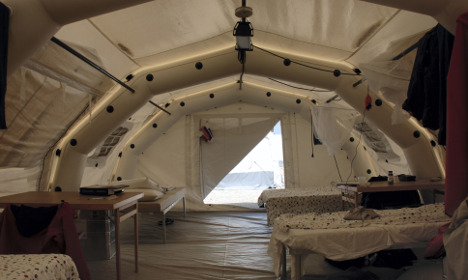 The Swedish Civil Contingencies Agency (MSB) has told the TT newswire that staff are already on site at Revingehed, a moorland area near military training grounds just outside Lund in southern Sweden.

“Erecting them will be done at lighting speed. But then it may take a bit longer before the first people can move in. We first need to organize everything else like rubbish collection, food and electricity,” said MSB manager Ann-Charlotte Zackrisson.

According to TT,  a total of 375 people will be able to stay at the tent camp, which is being erected near the Swedish Armed Forces' South Skåne Regiment. The 35-square metre tents will have electric heating and separate temporary bathroom and shower facilities will also be put up in the camp.

“Electric heating is included in each tent, but I don't know how warm it is going to be when it gets really cold. We're currently looking at the possibility of getting a cover tent that can be put over all the tents. That would increase comfort and keep the area dry,” said Zackrisson.

A press spokesperson told TT on Thursday that the agency was still hoping not to use the temporary camp at Revingehed, which she admitted was not the perfect solution.

“But we are under pressure and we are open to all solutions that provide roof over the heads of people who come to Sweden to seek asylum. But we hope we won't have to use them at all and that we find better housing,” said Matilda Niang.

The camp in southern Sweden is the only one being planned for now.

The announcement comes on the back of Sweden's Prime Minister Stefan Löfven raising concerns about a shortage of accommodation for the new arrivals, saying for the first time that tent camps could be needed in order to provide enough shelter for people reaching Sweden.

Meanwhile, his Social Democrat-Green coalition government was set to meet with representatives from the mainstream parties to discuss immigration policies. Members of the Left Party and the Alliance opposition quartet – the Moderates, Liberals, Centre Party and the Christian Democrats – were meeting on Friday in an attempt to find a cross-party solution to cope with the crisis.

As The Local has previously reported, more refugees have sought asylum in Sweden so far in 2015 than in any other year in the Nordic nation's history.

Earlier this week Migrationsverket revealed that a total of 86,223 people had launched cases so far in 2015, surpassing a previous record set in 1992 when 84,016 people asked for asylum following fighting in the Balkans.