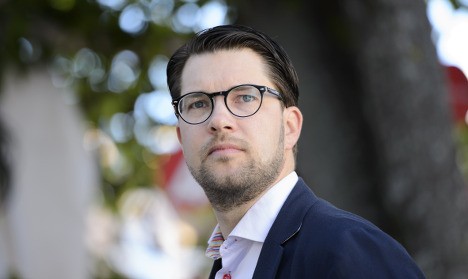 The far-right nationalist leader  –– whose party last week launched an international campaign designed to warn refugees not to come to Sweden  –– was speaking in an interview with the newspaper that also touched upon his long sick-leave absence from politics.

Åkesson returned to the fray from his extended sick leave in April, just before the catastrophic extent of the refugee crisis, the worst since World War Two, became fully evident.

“My message to these people is that Sweden can not take you. The absolute majority, if not all, of those seeking asylum in Sweden don’t have Sweden as their first safe country. They come from Germany and they come from Denmark. And they came to those countries from other countries.”

“At some time you have to cherish the principle of first asylum,” Åkesson continued.

“What we will do is to enable people to remain in the immediate area so that they can get their basic needs met there. It should not be particularly difficult to tell people that, unfortunately, you will not enter our country because it is full.”

Åkesson told Dagens Nyheter that he also wants Sweden to leave the EU.

“We want permanent border controls and we’re opposed to free movement within the EU. Sweden must be a sovereign state. It is clear that we must have a trade cooperation with other countries in our region, but, no, I don’t want Sweden to be a full member of the EU.”

According to Åkesson, it was a combination of external and internal pressures that led to his long period of sick leave after the 2014 election.

He had spent the entire election campaign touring around Sweden and found it exhausting.

“It was great to see all these people but afterwards I found it very difficult to disconnect. I was gone physically and mentally. My psychologist has described it as post-traumatic stress.”

Regarding the recent collapse of the December Agreement, the accord that allowed the minority government of the Social Democrat prime minister, Stefan Löfven to govern and set its own budgets, Åkesson doesn't think it changes much.

“The collapse is only on paper. If you listen to the debate, it becomes quite clear that the centre-right parties intend to continue to follow it. At least in the short term. And I think that's an important statement. I find it very difficult to understand how they can credibly be able to explain to their voters why they prefer a socialist budget instead of a moderate budget, when they actually have the chance to choose.”

As to the future of his leadership of the Sweden Democrats, Åkesson has no plans to step down, stress or not.

“I have committed myself to change society, and I have not done it yet. We are now the third largest party in Sweden and we are fighting to be the largest party, perhaps, in the next election. As long as it goes in that direction, it's fun.”