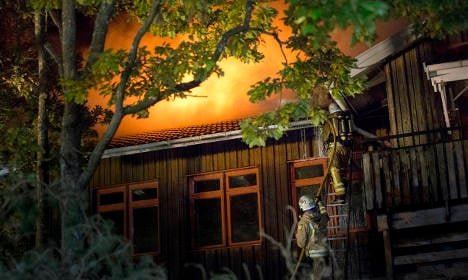 The fire was attended by 20 firefighters. The building, part of the otherwise demolished Furulidsskolan, was to be prepared to greet asylum seekers in the affluent area of Kungsbacka.

“Half the building has been damaged by fire,” said Mikael Lindgren, lead operator of the emergency services in Greater Gothenburg.

The cause of the fire is unclear but police will cordon off the area and carry out a technical examination when the emergency services have finished making the property secure.

The fire occurred just a day after a school, just south of Ljungby in Småland, was also destroyed by fire. The school building was to be used to accommodate refugees and had recently been decorated.

On Tuesday night a building in Arlöv in Skåne, designed for unaccompanied refugee children, was badly damaged. The centre was due to be open to the children the following day.

Two months ago, two other refugee centres were the targets of arson attacks.

There have been a suspected 14 arson attacks on asylum centres since the start of the year.

As The Local has previously reported, more refugees have sought asylum in Sweden so far in 2015 than in any other year in the Nordic nation's history.

Last week Migrationsverket revealed that a total of 86,223 people had launched cases so far in 2015, surpassing a previous record set in 1992 when 84,016 people asked for asylum following fighting in the Balkans.