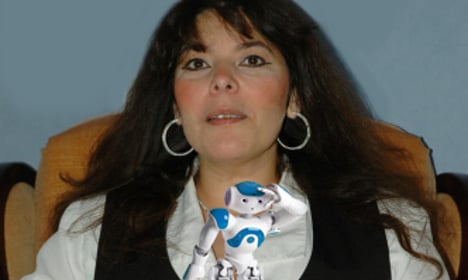 That's Veronica Chiaravalli's message to fellow women entrepreneurs hoping to break into Sweden's startup and tech scene. After all, that is how she made the leap.

Born in South America, the businesswoman and self-described social technopreneur has lived in Argentina, Uruguay, the United States, and for the past 16 years, Sweden. But it was only this summer that she took the step of launching her own tech startup in Stockholm.

The Local speaks to Chiaravalli as her Emerging Technologies prepares to organize its first workshop later this month, targeting female potential entrepreneurs to give them a hands-on experience of robotics and innovation.

“Robotics is going to have a huge impact worldwide and we want to help women get the necessary skills. Our lives are becoming more and more like science fiction with new technologies kicking off and our lives are changing every day,” she says.

The workshop will, among other things, see a robotics instructor help participants put together their own robot models, teaching them skills needed to keep up in an increasingly digitalized world.

“My favourites are social robots, which communicate, have special gestures, and can perform tasks. Robotics is going to become very important in Sweden in the future, because people live longer and are going to need help,” says Chiaravalli.

DEBATE: Will robots take over your job in Sweden?

While the Nordic nation is one of the most gender equal countries in the world and an increasing number of women are getting involved in coding and IT, it remains a male-dominated area. But to be able to meet future challenges, Chiaravalli argues, bridging this gap is vital.

“It's not even about men and women, it's about innovation. The best teams come from different backgrounds and different countries. Especially startups need more female founders. We need to collaborate more and support each other,” she says.

For Chiaravalli herself, the road to founding her own business was long and winding. She describes her varied background as a creative designer and gymnastics teacher as “very different” to many other tech-savvy internationals climbing Stockholm's startup ladder.

“It's a struggle for everybody to get into the labour market in Sweden. You have to have technological skills in this line of work and me, I'm not an engineer, I'm a visionary entrepreneur,” she says.

“But I've done it all myself. I designed the website and put a lot of work into it. I've taken online courses and I did a lot of networking before I started.” The robot kit from Picaxe that will be used at Chiaravalli's workshops. Photo: Private

Chiaravalli fell in love with robotics and experimental technologies at a Meet-up gathering last year, a social website where users can organize events and get together with like-minded people. But in a sense, her story dates back even further.

“When I was six years old we moved to the United States and my father used to buy me a robot every year. I don't know why he did that, but maybe there's some connection there,” she smiles.

Boasting success stories such as Spotify, Klarna and iZettle, Stockholm is a world-famous hub for both domestic and international startups. But Chiaravalli believes it could do even more to help emerging businesses and in particular budding female entrepreneurs.

“There should be more support for startups. In particular, we need access to more spaces to hold workshops and events. There is a lot of talk about equality but we need to do more.”

In the meantime, she is doing her bit to pull fellow businesswomen up behind her through the tech industry's glass ceiling. And her advice to any hopefuls is not to be afraid.

“You have to be very driven. When you have a business idea you have to see it through. (…) I would like to tell them to be more adventurous, take steps, try new things and get into these amazing technologies,” she says.