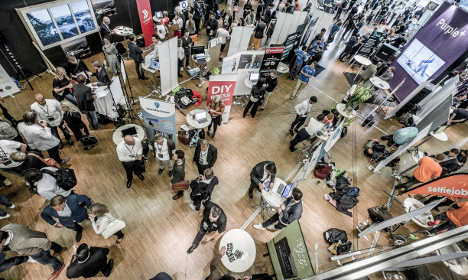 The European Digital City Index for 2015 rated the Swedish capital third best in Europe for startups and second best for scaleups – the next step after the first phase, where a company has figured out a good business model and wants to expand.

London topped the charts for both, while Amsterdam took second prize for startups. But Stockholm outperformed competitors such as Berlin and Copenhagen, whose startup sectors only came in fifth and seventh place.

The index released was created by UK-based innovation charity Nesta as part of the European Digital Forum. It rates cities by how well they create a supportive environment for digital companies, from local business regulations to available financing to the skill level of the workforce.

“As expected, Stockholm features quite highly on our list (…) It is the European city leader on many measures of digital infrastructure,” read its explanation, highlighting the number of ICT specialists as well as good access to speedy broadband and fibre connections.

“The Swedish capital has produced several of Europe's biggest digital companies such as Spotify, King (creators of Candy Crush) and Mojan (creators of Minecraft),” it said.

Nesta went on to commend Swedes for their “strong English language skills” as well as the government for supporting entrepreneurship by allowing startups to apply for funding via Vinnova, Sweden's innovation agency.

“The city is also home to top ranking universities, such as the Karolinska Institute, as well as telecoms giant Ericsson, which promotes strong knowledge spillovers,” it added.

And following in the footsteps of the likes of giants Klarna, Spotify and Mojang, Stockholm is fast becoming one of Europe's biggest tech hubs. According to separate recent research for investment firm Atomico, Stockholm has the largest number of billion dollar companies per capita outside of Silicon Valley.

A separate report released on Monday by Industrifonden, tracking funding flowing into the Nordic country, revealed that more than one billion dollars has already been invested in Sweden's tech scene in 2015.

“The Swedish startup sector is booming and continues to punch above its weight in terms of global winners,” the report concluded.