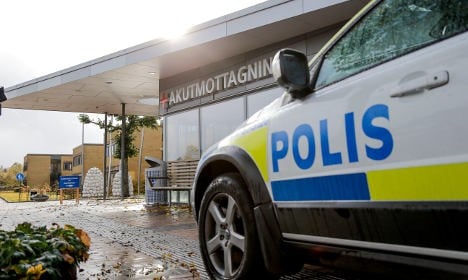 Police at the school on Thursday. Photo: Björn Larsson Rosvall/TT
1. Who is the attacker?
The suspect in the attack was 21 years old and was carrying several “knife like” objects when he entered the building. He is reported to have been wearing a Star Wars mask and some pupils thought his appearance was a prank. Police have revealed that the man lived in Trollhättan and held far right views.
2. Who are the victims?
A teacher was the first victim to be reported dead on Thursday afternoon. A pupil at the school who was being treated in hospital for serious stab wounds has also died. The attacker was confirmed dead at a police press conference at 4pm on Thursday. Police at the school on Thursday. Photo:  Bjorn Larsson Rosvall/TT
3. What do we know about the school?
Around 400 pupils aged between six and 15 study at the Kronan school, which is one of the ten worst performing in the country. According to Sweden's education watchdog, the Swedish Schools Inspectorate, only 16 percent of 15-year-olds at the school passed all subjects in 2014.
“This is a school where problems have been picked up,” Larz Blomqvist, chairman of the teacher's union in the municipality, told The Local. Relatives waiting outside the school on Thursday. Photo: Bjorn Larsson Rosvall/TT
4. What is Trollhättan like?
Trollhättan is an industrial town 75km from Gothenburg in west Sweden. It is home to around 50,000 people. The town is home to the former Swedish carmaker Saab which filed for bankruptcy three years ago.
Like many municipalities in Sweden, it is taking in rising numbers of immigrants. According to Statistics Sweden, 3,046 foreigners moved there in 2014.
In a 2012 national survey when people were asked to rate how safe they felt during evenings and nights on a scale of one to ten, Trollhättan scored 5.1 compared with a national average of 6.5. When questioned about how much they feared threats, robbery or violence, the score was 5.1, in contrast to a 6.4 average for Sweden. The Saab plant in Trollhättan. Photo:  Bjorn Larsson Rosvall/TT
5. How frequent are school attacks in Sweden?
School attacks are incredibly rare in Sweden. In 1961 a school shooting took place in Kungälv, in southwestern Sweden. It left one person dead and six others injured.
No other mass shootings or stabbings have occurred since then, though at least one attack has been foiled, in the southern city of Malmö in 2004. Other threats have been issued but not followed through.
“It’s extremely unusual. But since it has happened in the US, in Finland, I wouldn’t say it came unexpected,” Jerzy Sarnecki, a Swedish professor in criminology told The Local.
“It’s very shocking for Sweden. It’s of course very sensitive for us all to experience that our children and pupils are being threatened and attacked like this.”
Swedish police confirmed that there had been a threat against another school in the area (Stavreskolan) on Wednesday but said that nothing had come of this.
Lund University in southern Sweden was closed earlier this month after an anonymous threat on social media.