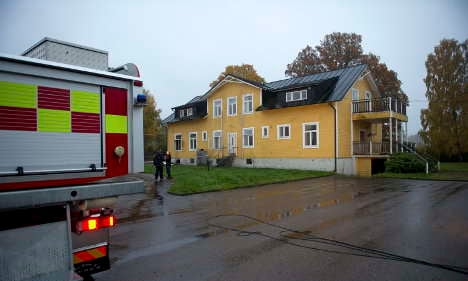 The building was not yet housing asylum seekers but a decision to turn the disused care centre into accommodation for those fleeing war in Syria and elsewhere was expected to be made on Thursday, according to regional newspaper Sydsvenskan.

Teams from three fire stations in the region were sent to tackle the blaze in Oderljunga, after the alarm was raised at around 2.40am, the paper reported.

It was understood that the fire was put out almost immediately, although the building was left with bad smoke damage and water damage following the firefighters’ efforts.

No one was inside the potential accommodation at the time of the fire.

Swedish broadcaster SVT said it had spoken to several emergency staff who said they believed the retirement home had been attacked deliberately, following a string of similar incidents elsewhere in Sweden over the past fortnight.

Daniel Sirensjö, who was working overnight in the control room for the region’s fire and rescue service told the broadcaster: “Based on what has happened so far in the country and given that the window is broken, it is easy to suspect that it was planned. But it is a police matter to investigate the course of the fire”.

Police said that they would carry out a technical investigation on Thursday but were already treating the incident as a suspected arson attack.

The fire in Oderljunga follows a suspicious blaze at an old school building earmarked for asylum accommodation in Onsala south of Gothenburg over the weekend, just days after another two hubs were burned to the ground in Ljungby and Arlöv in southern Sweden. A further centre in Upplands Väsby, north of Stockholm, was also damaged on Tuesday night.

Security has been stepped up at refugee accommodation across the Scandinavian country in the wake of the alleged attacks.

Meanwhile Sweden's Prime Minister Stefan Löfven has this week raised concerns that “Sweden is approaching the limit of its capacity” as it continues to take in record numbers of asylum seekers.

But the Social Democrat leader told Swedish media on Wednesday that he felt “warm and proud” to be running a country that was doing so much to help asylum seekers.

Around 100,000 refugees have now arrived in the Nordic nation since the start of 2015, according to the latest figures from Sweden's Migration Board (Migrationsverket).

The government agency said on Thursday that it expected a further 40,000 to 90,000 more would show up in the country before the end of the year.

“More people than ever are seeking asylum in Europe and Sweden and the situation right now is unprecedented. In Sweden it has among other things led to us now having difficulties finding accommodation to all of those who come here,” said the Migration Board's Director General Anders Danielsson in a press release.