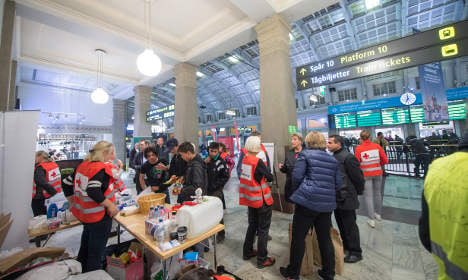 The numbers are more than twice as high as the agency's forecast from earlier this summer. In July it predicted 74,000 asylum claims would be made over the whole of 2015. And Director-General Anders Danielsson told reporters at a press conference in Stockholm that Thursday's figures may change.

“We note that the current refugee situation is unprecedented in modern times. We see pictures of people literally walking from Greece, across the Balkans and Germany and towards the Nordic countries. More people than ever are seeking asylum in Europe, but there is no border control and no exact figure,” he said. In a press release, the agency warned that more accommodation must urgently be made available if Sweden is to be able to cope with the increasing influx of people fleeing wars in Africa and the Middle East. The country is likely to be short of 25,000-45,000 places at asylum centres by the turn of the year, it said.

“The sharp increase in asylum seekers coming to Sweden means the Migration Agency's current capacity is no longer sufficient to provide an orderly reception of new asylum seekers,” said the release.

Danielsson said at Thursday's press conference that the authority was investigating a range of options, including housing refugees in former bomb shelters. The move follows similar discussions in Switzerland, which suggested earlier this month that asylum seekers could be put up in nuclear bunkers if needed.

READ ALSO: First tents for refugees set up in Sweden

Asylum immigration is expected to cost Sweden 60.2 billion kronor ($7.23 billion) in the coming year and 73 billion kronor in 2017. The Migration Agency said on Thursday that it is likely going to need 29 billion kronor on top of what has already been included in its budget for this year and 41 billion next year to manage the situation.

Finance Minister Magdalena Andersson admitted that the sharp increase in asylum seekers would put a strain on public finances, saying that the government would be looking at ways to lend and save money to be able to cope with the crisis. She added that there was no immediate plan to raise taxes. Sweden, a country of 9.8 million, is known for its generous asylum policy and welfare state, and is a preferred destination for refugees. It has one of the highest proportion of refugees per capita in the European Union.

“The EU's and individual member states' actions will play a decisive role in how many asylum seekers come to Sweden in the future,” Migration Agency analyst Merjem Maslo said in a statement.

Commenting on the new forecast on Thursday morning, Justice and Migration Minister Morgan Johansson told reporters that it was more important than ever that other EU countries step up to take in more refugees.

“So far we have managed to give these people roofs over their heads (…) but it is easy to look at this and draw the conclusion that it is not sustainable for Sweden if it continues,” he said and added that he would continue to push the issue at a summit of European ministers next month. Meanwhile, the Dagens Nyheter newspaper reported that a crisis meeting between the ruling Social Democrat-Green coalition, the Left Party and the four mainstream centre-right opposition parties originally scheduled for Thursday had been cancelled at the last minute.

The parties are instead set to meet on Friday, sources told the Swedish daily.

Sweden's Prime Minister Stefan Löfven this week raised concerns that “Sweden is approaching the limit of its capacity”. But the Social Democrat leader also told Swedish media on Wednesday that he felt “warm and proud” to be running a country that was doing so much to help asylum seekers.