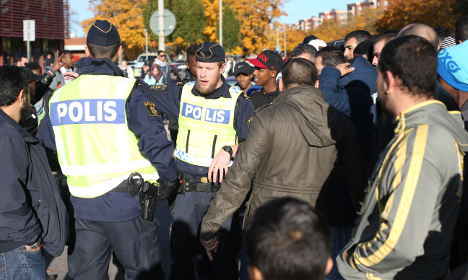 Officers were called out on several occasions on Friday after people dressed up in Halloween outfits and carrying toy guns and swords were mistaken for serious threats, just a day after a masked 21-year-old walked into a school in Trollhättan and stabbed two people to death with a sword.

In Östersund, 10 police arrived at a school within three minutes after being called out after a teacher saw a person with a sword entering the building. Meanwhile a masked teenager believed to have been threatening other pupils with a “gun-like object” at a school in Katrineholm was arrested.

And in Gothenburg terrified commuters called the police after they spotted a man in military clothes and “carrying several weapons” on the tram. Eight officers stormed the carriage only to realize their suspect was no more than a Halloween reveller.

Martin Lundin, national police officer, later told the TT news agency that it is often difficult to tell a toy weapon from a real weapon at a distance, and warned that people in fancy dress could even be putting themselves at risk.

“If you don't follow police directions, which happens easily if you don't understand how serious it is because you're only joking, it can get dangerous. There is a real risk to be injured yourself if you behave in a threatening manner,” Lundin said.

Earlier in the day, an anti-racism demonstration took place outside the Kronan school after police confirmed to Swedish media at a press conference in Trollhättan that they believe the attacker had racist motives.

Chief Investigator Thord Haraldsson said that the man had been violent towards people with “dark skin” and had spoken to others with “light skin” whom he did not hurt.

He said that officers had reached this conclusion after examining CCTV footage from the school.

In a separate earlier statement, police press spokesperson Peter Adlersson told the TT news agency that “how he was dressed and how he behaved” had also played a role in helping detectives to reach their conclusion.

Haraldsson also revealed that his officers had found “a type of suicide letter” at the attacker's home.

However he remained unsure whether the assailant had chosen to attack the Kronan school specifically because it has a high percentage of immigrant pupils, but said “you could suspect” that was the reason. Police said at the press conference on Friday that they were convinced that the attacker had planned the violence alone.

Haraldsson said his outfit suggested Nazism and revealed that CCTV pictures also showed him marching through the school corridors in a military style brandishing a sword.

The assailant killed a teacher and a 17-year-old student. Police shot him at the scene and he later died from his injuries.

Some pupils at the school said they initially thought it was a prank and even took pictures with the attacker. One of those photos was widely circulated on social media on Thursday before being published in Sweden's leading tabloid and broadsheet newspapers.

Meanwhile, hospital spokespeople in the region confirmed on Friday morning that a 15-year-old teenager who was also injured in the attack remained in hospital but that his condition had improved.

“He has been awake and has been able to speak. The situtation is considered to be stable,” Ulrika Jifland told TT.

Trollhättan, where the attack took place, is an industrial town in western Sweden with around 50,000 residents.
Like many municipalities in Sweden, it is taking in rising numbers of immigrants. According to Statistics Sweden, 3,046 foreigners moved there in 2014. But it is not a nationally notorious hotspot for violent or race-related crimes.
However, in a 2012 national survey when people were asked to rate how safe they felt during evenings and nights on a scale of one to ten, Trollhättan scored 5.1 compared with a national average of 6.5. When questioned about how much they feared threats, robbery or violence, the score was 5.1, in contrast to a 6.4 average for Sweden.