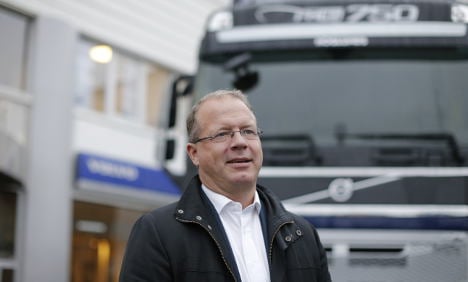 The Gothenburg-based company, which is one of the biggest in Sweden, said that its earnings excluding interest, taxes and restructuring and reorganisation costs amounted to 5.1 billion kronor ($604 million) during the third quarter of the year.

This compares with a profit of 2.3 billion kronor during the same period in 2014. Analysts had, on average, predicted a profit of around 3.5 billion.

In a statement, Volvo Group added that sales had risen by nine percent to 73.3 billion kronor.

The firm is the second-largest truck maker on the planet. It has experienced rising sales in Europe in recent months but seen customer demand falling in the US.

According to analysts at Bloomberg, Volvo is restructuring to become more profitable amid further market declines in China and Brazil. Ahead of the profit results announcement, Bloomberg Intelligence said that the truck maker could struggle to achieve 10 billion kronor in cost savings next year.

Martin Lundstedt was appointed to the role in April, having previously worked at its main rival Scania – which is owned by Volkswagen – taking over from Volvo Group’s previous head, Olof Persson.

Volvo Group is separate to the Volvo Car Corporation, the car firm that was sold to Ford in 1999.