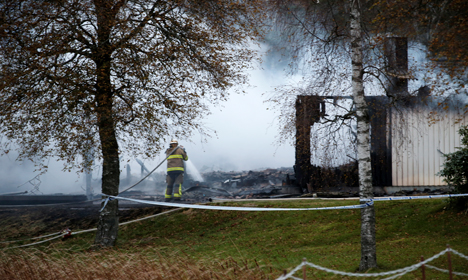 Many Swedes have expressed concern over the recent number of suspected arson attacks, such as the one in Munkedal (pictured). Photo:TT/Adam Ihse

In Eskilstuna, around 110 kilometres west of Stockholm, emergency services got a call at around 11pm that a building, part of a children’s summer camp and under consideration for refugee housing, was on fire.

The building, the main structure in the camp complex, burned to the ground. There were no people inside it at the time and no one was injured.

Police are investigating the incident as arson but currently have no suspects.

The local Eskilstuna-Kuriren newspaper reported earlier this month that the municipality was considering using the building as a possible location for the provisional housing of refugees.

In Munkedal, a town of 10,000 inhabitants in south-western Sweden, another fire broke out at the same refugee centre that also burned last week. This time, the blaze was not as extensive and was extinguished quickly.

The area had been cordoned off since the earlier fire and no one was injured in this new incident.

These fires are the latest in a string of suspicious blazes to hit asylum centres in the country. There have been at least 15 since the beginning of this year.

The damage has been cause as more refugees seek asylum in Sweden than in any other point in the nation’s history.

On Friday, a political row related to the refugee centre fires flared up. Justice and Migration Minister Morgan Johansson of the Social Democrats reacted strongly to a list of prospective refugee centres published on Facebook by the far-right Sweden Democrats in the city of Lund.

“In a time when refugee centres are being set ablaze, the Sweden Democrats in the city of Lund put out addresses and a map of planned centres. Disgusting!” he wrote on Twitter.

Ted Ekeroth, spokesman for the Lund Sweden Democrats, dismissed the idea that publishing the information would increase the risk of new attacks.