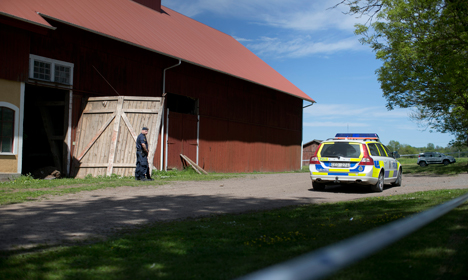 Prosecutors said Holm had been hanged in a barn near where she worked. Photo: TT

According to the younger brother, the suspect went out on Sunday afternoon and returned home about half an hour later, changing his clothes and putting them in the washing machine. Both he and the wife found that strange, since the man usually washed his clothes on Saturdays, the man told Sweden's Aftonbladet newspaper.

Investigators learned of this during an interrogation in mid-June, the Swedish tabloid reported, shortly after 17-year-old Lisa Holm's body was discovered following one of the most high profile missing person cases in the country in years.

Days later, the three were at home when they saw that police were in the vicinity. The brother heard the wife say to her husband that the police might think he was involved in the murder because of his dirty clothes on that day and the washing. The suspect reacted angrily.

“He said in a crystal clear way that we should not tell anyone about that. He didn’t threaten us, but he said we shouldn’t be stupid and tell the police anything,” the brother told investigators.

During the same conversation, the suspect told his wife and brother they should tell the police that he was home at 6pm on the Sunday Lisa Holm disappeared.

On Friday, prosecutors said the teenager’s murder was sexually motivated, although on her body there were no traces of a direct sexual assault. Prosecutors at a press conference in Skövde said Holm had been hanged in a barn close to the café in Kinnekulle where she had worked, alleging that the suspect then moved her body to the location where she was found. This is despite the fact that no traces from Holm’s body were found in the suspect’s car.

The autopsy found that the 17-year-old had not been assaulted although her body was partially unclothed when she was found. The girl’s mouth had been taped shut.

“As we see it, any other motive than a sexual one is hard to imagine,” Deputy Prosecutor Lars-Göran Wennerholm said.

A woman who was jogging in the area several days before Holm disappeared told police that she had been approached by a man asking for directions. He insisted she get in his car but she refused. She later identified the murder suspect as the man who had spoken to her.

The 35-year-old has denied any connection to the crime, although his blood was found on Holm’s coat and on a piece of rope. Traces of his semen were found in the barn.

The suspect attracted police attention when it was discovered he had tried to discourage the group Missing People from combing the area for Holm after her disappearance, saying it had already been searched.

The suspect’s younger brother and wife were initially suspected of involvement in the crime, but that investigation was later dropped. Both have said they do not want to be called as witnesses in the trial, which will start on Wednesday.