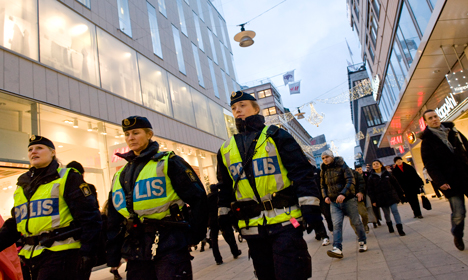 More money and better recruitment will be needed for the police to be effective going forward, the nation's police commissioner says. Photo: AFP

In the past, Eliasson has been careful about calling for more government support. But now he is pointing out a strain on the police that will likely only increase.

“Even in the short term, the stream of incoming migrants is taking up a lot of our resources,” he told the TT news agency.

What the police will request for their funding is not yet known.

In addition to its future budget needs, police are also considering if they need to step up their recruiting efforts.

“If the population increases by 0.5 to one million people, the police force needs to grow along with it,” Eliasson said.

He said more and more officers are required at points where migrants arrive, such as train stations in large cities and ports. In addition, staff are called on to watch over refugee centres.

Because police personnel numbers have not risen along with the increase in refugees, other tasks carried out by police are being affected, according to Eliasson.

“We’re going to be very clear with the government about our forecasts and that we also have to be prepared to choose which functions we can fulfill and lower our ambitions,” he said.

However he confirmed it was too early to say whether that meant investigative work for certain crimes could be negatively affected.