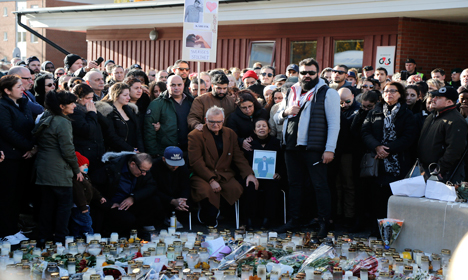 Family members of the teaching assistant who died were among those at the moment of silence gathering in Trollhättan. Photo: TT

Many of those taking part stood with heads bowed. The sun shone over the improvised memorial square and in the distance, the sound of church bells could be heard.

Family members of the 20-year-old teaching assistant who was killed, Lavin Eskandar, were among those gathered.

“He saved your children, be proud of him,” said the slain man's mother.

“We are all Swedes,” Eskandar's cousin added. “We must stick together and teach our children what really matters.”

The initiative for the period of silent reflection came from Robin Mashallah, who is from Trollhättan and knows several people who work at the school. Members of his family also know Eskandar's family.

“It’s my way of showing solidarity,” he told the Metro newspaper. “I want to show compassion.”

He organized it via a Facebook event page. As of Sunday morning, 259,000 people had said they would participate.

“A tragedy has hit Sweden and all of our thoughts go to the victims at the Kronan school in Trollhättan. Therefore we should hold a moment of silence for all who are affected to show solidarity with our fellow human beings,” said a message on the Facebook page.

On Thursday, 21-year-old Trollhättan native Anton Lundin Pettersson rampaged through the Kronan school, stabbing two people to death and seriously wounding two others before being fatally shot by police. Authorities are calling it a racist hate crime. Many of the school’s students are immigrants and Pettersson methodically attacked dark-skinned individuals.

The incident shocked Sweden, where school attacks are very rare.

Mashallah is active in the Social Democratic Youth League, but says there was no political or religious purpose behind the moment of silence.

Also on Sunday, thousands came together for a torchlight procession organised by the youth wing of Sweden’s Left Party. The procession passed slowly by the Kronan school, outside of which burning torches had been set up in the outline of a large heart.

“I am here to demonstrate against violence. It's just hard to take it all in,” Marie Egnell told the TT news agency.

A stage set up near the school allowed those who had come to express their thoughts and emotions around the attack.

The Kronan school is still closed and it is uncertain when it will reopen.