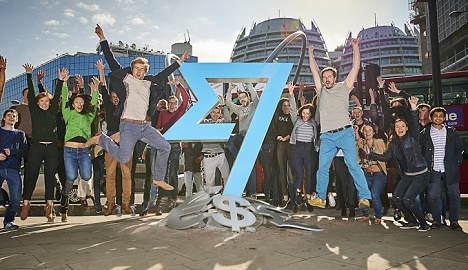 Roxanne is an English student living in Paris. Carl is a New Yorker working in London and his girlfriend lives in France. Benjamin is an international professional with clients around the world.

And besides the obvious fact that they spend a lot of time abroad, they all have one thing in common: Their lives have been made much easier by TransferWise.

“I’m now able to transfer money within minutes from my mobile on the go and while travelling,” says Benjamin. “Waiting at the gate, in the taxi, or in a café.”

Like thousands of expats around the world, Benjamin discovered that international bank transfers can be more complicated than they’re worth.

“It used to be a hustle and a pain each time to contact my bank rep, write order mails, and get charged high fees,” says Benjamin. “I take my business to all corners of the world, and therefore I have different currency accounts and need to transfer money quickly.”

Losing money when making transfers abroad is not just an issue for small businesses. It's a common issue for expats on a personal level as well.

“The first time I had to do an international transfer I remember being unpleasantly surprised at how little money I had left on the table,” Carl recalls.

TransferWise is the peer to peer money transferring service that solves these problems. While living in London as expats themselves, Estonian founders Taavet Hinrikus and Kristo Käärmann experienced the problem first-hand – and in 2011 they decided to do something about it.

With just a few clicks, TransferWise lets users send money around the world for the best rates – guaranteed. The service charges just 0.5 percent on most transfers – making it up to ten times cheaper than a typical bank.

“TransferWise is the answer for many people, either just sending money to a friend abroad, paying bills, or transferring to their own accounts back home,” says Benjamin.

Roxanne, who frequently transfers funds from her English bank account to her French account, says she only uses TransferWise now. “I know for a fact that I get charged a lot more if I transfer with my bank, HSBC,” she says. “I get better rates and it is quick and easy. I am constantly on the go so I don’t always have a laptop on me, so it is really good just to use it on my phone or iPad.”

Carl agrees, noting that it’s now his go-to method for handling costs back home in the US.

“When I finally found out about TransferWise it was a huge help for me to pay my credit card bills,” Carl remarks. He also uses the service when he visits his girlfriend in France.

“I can just send her some money, and when I show up she has some euros waiting for me and the same thing when she comes to the UK. It allows you to be more flexible and you save time in multiple countries.”

Since starting in 2011 the company has grown massively, adding some 400 currency routes. So far the firm has attracted some $91 million from investors (including VC Andreessen Horowitz, who also invested in Airbnb, Facebook and Buzzfeed).

The company continues transferring $700 million every month, and thus save their customers $34 million in hidden fees every month.

“TransferWise is highly trustworthy – not all banks can claim that nowadays,” Benjamin remarks. “TransferWise is helping to build trust around the financial tech industry as a functioning and already well-established service.”

This article was produced by The Local in partnership with Transferwise.

File photo: Stina Stjernkvist/TT
Stock markets across Europe suffered for the third day in a row as the arrest of a top Huawei executive in Canada has raised the spectre of an all-out trade war between the US and China.
For the Stockholm Stock Exchange, it meant a blood-red trading day that ended as the worst of the year thus far. The OMXS Stockholm 30 index fell by a combined 2.8 percent.
The majority of the companies on the index lost value, with the exception of Ericsson, which seemed to benefit from the news about its Chinese competitor Huawei with a 1.8 percent increase. Airline SAS also saw its stock increase, rising 4.2 percent thanks to sharp declines in oil prices.
Among Thursday’s biggest losers was the mining company Boliden, which suffered a 6.1 percent drop. The stock of the Stockholm-based tech company Hexagon fell 5.6 percent.
Meanwhile, the stock of Swedish auto safety equipment manufactor Autoliv fell 6.1 percent on the news that it expects to pay some 1.8 billion kronor in fines as a result of an European Commission investigation into anti-competitive behavior in the EU.
Stockholm was far the only European bourse to have a gloomy Thursday. The CAC index in Paris fell 3.3 percent, the DAX index in Frankfurt dropped 3.5 percent and the London Stock Exchange's FTSE index decreased by 3.2 percent.
SHOW COMMENTS
Url copied to clipboard!