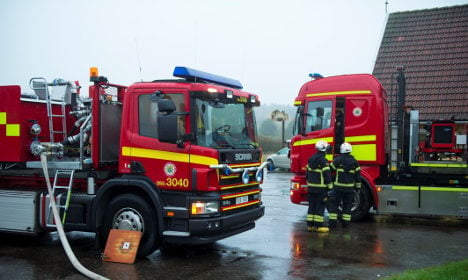 Staff at the home for unaccompanied minors, which is also a residence for disabled people, were able to put out the fire themselves shortly after 10pm on Monday evening. No one was injured.

Police have launched a probe into the blaze in the southern Swedish town, which they believe was started deliberately, investigating arson and possible hate crime motives.

Earlier in the evening alarms were raised after a number of minor fires at a planned centre for refugee housing at the Kikebo school in Oskarshamn. Witnesses spotted two people throwing rocks through a window and lighting pages from the Bible on fire, reported SVT. Another fire at a centre in Munkedal last week. Photo: Adam Ihse/TT

Concerns over the safety of refugees in Sweden have grown after the series of fires. The latest suspicious blazes happened on Friday night, following more than a dozen similar attacks since the start of the year.