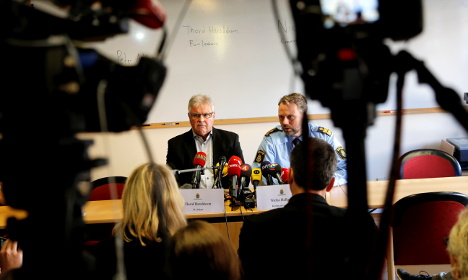 Police were able to question the seriously injured teenager on Monday afternoon. He remains in hospital along with another teacher also injured in last week's suspected hate crime attack.

“The 15-year-old has told us a little about what happened. He is not well, but was able to let himself be questioned anyway,” Thord Haraldsson, chief investigator in the case, told the TT newswire.

“He said that the assailant knocked on the door. The boy opened and then he got stabbed,” he also told the Expressen tabloid.

Officers have asked experts at Sweden's national police department to help examine the profile and background of the killer, Trollhättan native Anton Lundin Pettersson, 21, who rampaged through the Kronan school on Thursday, stabbing two people to death and wounding two others before being fatally shot by police.

Although police believe Pettersson acted alone, they are trying to find out as much about him as possible to help prevent and investigate potential future cases and to establish what his motive was.

“Psychologists, forensic pathologists, police officers and others are collecting information about this person and then there's going to be a final statement in a few weeks. It could be a lot or a little, we have to wait and see,” said Haraldsson.

Authorities have previously suggested it could have been a racist hate crime. Many of the school’s students are immigrants and CCTV footage showed Pettersson methodically attacked dark-skinned individuals.

A police cordon around the Kronan school was lifted on Monday afternoon after forensic teams continued their crime scene investigation. But the building will not reopen until pupils return from their annual autumn break next week.