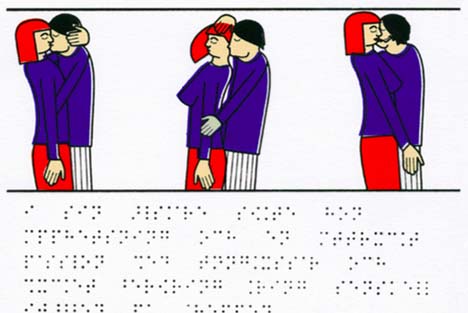 A copy of the book is being kept at Kungliga Biblioteket in Stockholm (pictured). Photo: Dan Hansson/TT
Linde said that her fascination with the sex lives of people experiencing sight problems had emerged when she was a student in Chile and helped a man to cross the road. After she told him she was from Sweden, he made a joke about the Nordic nation's liberal approach to sex.
“This realization, that he had these thoughts even though he was blind, made me curious about how blind people’s sexuality is being discussed in society,” she explained.
Håkan Thomsson, president of Sweden's National Federation of the Visually Impaired, told Sweden's Metro newspaper on Tuesday that he believed the books were a positive step for those with sight problems in the Nordic country.
“I think that some imagine that we have no sexuality, which is not true. Visually impaired people are just as sexual as any other,” he said.
Sweden is famous for its stance on gender norms and sexual relations.
Last month a series of sex education books was launched to help Swedish teens with special needs get to grips with puberty, love and masturbation.
Meanwhile a children's television programme recently hit the headlines for a music video about menstruation and a cartoon depiction of dancing genitals designed to explain gender differences, which was later released in English.
Linde told The Local that she would eventually like her book to be released globally, but was not good at marketing her work.
“The language in the book is Swedish, but it would be nice to publish it in more countries. I just don’t have the time translate it, I have a full-time job.”
Interview by August Håkansson