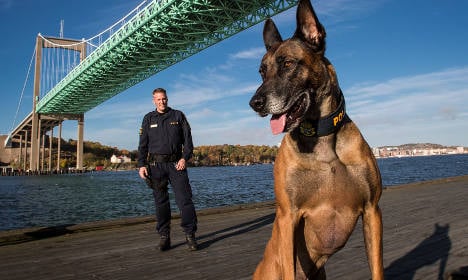 The four-year-old Belgian Shepherd spends most of his dog days rounding up criminals with his human handler, police officer Petter Fransson, in the greater Gothenburg area.

But he rose to fame on Tuesday after a jury consisting of representatives from the Swedish Kennel Club (Svenska kennelklubben), the national police authority, and the police's dog handler unit, chose to award him for his hard work by naming him 'Police Dog of the Year'.

The jury praised him for a long list of accomplishments in 2014-15, including sniffing out a number of illegal drugs and weapons hauls, racking up to 20 kilos' worth of amfetamin, 11 kilos marijuana, 11 guns and three automatic rifles.

But there is another incident which has lodged itself in Fransson's mind. Herman recently saved the life of a three-year-old boy who had gone missing for an hour and a half, discovering the toddler asleep in a small wooden shelter.

“When I saw that little bundle, I felt that all the training we had carried out together had been worth it. When we woke the boy up he got scared at first when he saw Herman and me, but he was happy again when he noticed the police helicopter,” said Fransson in a press statement.

Herman, whose full name is Herman von den Sennequellen, moved in with Fransson when he was only eight weeks old, eventually joining the police corps at the age of 18 months.

“He's not overly interested in people, which I view as an asset in his work as a patrol dog. He says hi and can receive a pat, but after that he wants to continue to work,” said Fransson.

“At home in the family he is kind and responsive, which I think is due to the fact we spent a lot of time building relationships when he was a puppy.”

The pair are set to visit Stockholm on December 12th to accept their award. Fransson will be handed a travel stipend worth 20,000 kronor and Herman himself will be given six months' worth of dog food, a comfortable bed and, of course, a juicy bone.