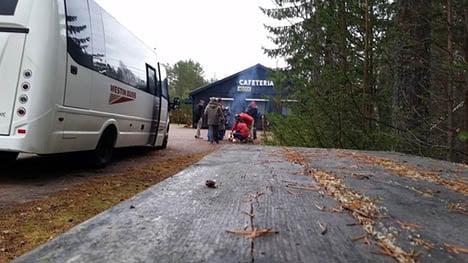 The bus at the holiday park on Wednesday. Photo: Sveriges Radio/Sofie Lind
Fourteen refugees are understood to have remained on the bus that took them to the holiday village comprised of wooden chalets in Lima in west Sweden over the weekend.
As The Local reported on Monday, the migrants argue that the location of their asylum accommodation is too isolated, with many also concerned about the upcoming Swedish winter.
“They told us we were going to live here, but it's not possible for everyone – there are children and a pregnant woman. It's too cold, there are no shops and no doctor,” a Syrian migrant who did not want to be named told Swedish broadcaster SVT.
On Wednesday, the bus company said it had requested the help of the Swedish Enforcement Authority (Kronofogden) to secure their eviction from the vehicle. The government agency more usually deals with sending bailiffs to deal with debt cases.
“It's a very unfortunate situation. The Swedish Migration Board has made every effort to resolve it, but this has not happened,” Kenneth Johansson, CEO of the transport company Westins told the TT news wire.
In an interview with The Local, Johanna Uhr, a spokesperson for the Swedish Migration Board (Migrationsverket) said that officials had tried to tell the refugees that there were businesses and a school nearby, but said that the group could not be persuaded to enter the holiday park.
“We have explained for them that this is the only possible accommodation that they can get for the moment and they can't choose where to live.”
But Uhr admitted that information from regional officials working for the migration board “wasn't good enough probably”, suggesting that the migrants – who travelled overnight – may not have been given sufficient details about their future housing ahead of their relocation from Stockholm.
“It was dark so they probably didn't think they were passing a school and shops and stuff and that's why they are scared and we understand this.”

A tweet by Swedish television network SVT, showing the holiday park on Wednesday
Meanwhile police in the region said they were investigating claims that a man had threatened the refugees on Tuesday night, telling them that they could be forced to return to Syria.
“Exactly what happened, or which man made these threats is still unclear,” said Stefan Dangardt, a spokesperson for Dalarna police, in an interview with TT.
Around 40 other migrants from Syria and Iraq are understood to be staying at the holiday park after accepting the temporary accommodation on Sunday.
Cases of migrants refusing their relocation are rare, according to Swedish migration officials.
However there have been a number of other high-profile incidents in recent months, including one involving another group who initially would not get off a bus in rural northern Sweden in January.
Sweden, with a population of 9.8 million, expects to receive up to 190,000 asylum applications this year – putting it among the EU states with the highest proportion of refugees per capita as the continent struggles with a massive influx of migrants.
But the country's long, dark winter, where temperatures can fall as low as -30C, is a major challenge for migrants moving from warmer climes.