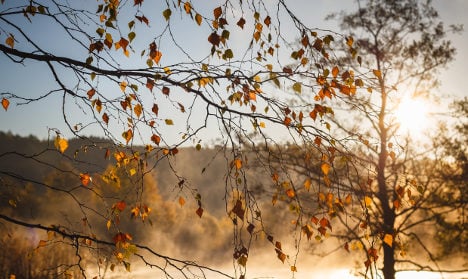 The sun shining over a Swedish lake. Photo: Stefan Isaksson/Image Bank Sweden
Temperatures in Borlänge may be hovering around zero, but the Swedish town, just south of Falun, one of the country's most famous ski resorts, has been enjoying a very sunny October.
According to meteorologists working for Swedish public broadcaster SVT, the mountainous spot has already broken annual sunshine records for this time of year, with four days still to go before the end of the month.
Umeå is also on course to enjoy its sunniest October, according to forecasters, while even the Swedish capital Stockholm could score a spot in the record books.
READ ALSO: Seven reasons to adore autumn in Sweden
“October has been unusually dry and sunny and this will continue until the end of the month,” said SVT's Deana Bajic.
“The rest of the week will be both warm and dry. In the south it will be up to 14C and in northern Norrland it will be 8C,” she added.
Sunshine is forecast across the country on Wednesday afternoon, although it could get cloudier before the weekend.
Chilly nights are also creeping in, with lows of -10C in Norrland in northern Sweden and temperatures even dipping to 2C in the Swedish capital, according to predictions from commercial forecasting agency Foreca.
Some parts of the country have already enjoyed their first snowfall. Låktatjåkko mountain station near Björkliden in Swedish Lapland reported its first post-summer flakes as early as September 4th.
But despite some long-term forecasts predicting more “extreme” conditions this coming winter than in previous years, SVT meteorologists said on Wednesday that it remained far too mild in most major cities for any snow to arrive by the end of October.
READ ALSO: 'Why I can't wait for a proper Swedish winter'