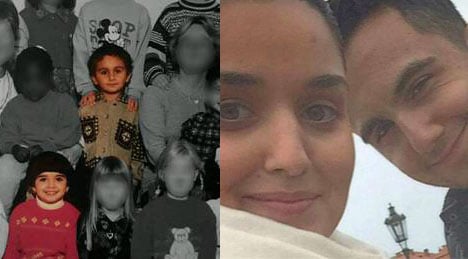 It was when Ali Hassan, 23, took out an old class photo from 1996 that the couple made a rather strange discovery.

He wanted to show his girlfriend the “ugly pyjamas” that he wore in the picture, which was taken during his time in preschool in Hässelby, a Swedish suburb outside Stockholm. His girlfriend, Amanda Bidar Pino, suddenly started to scream out loud.

She realized that the girl sitting in front of her boyfriend was herself. 19 years earlier, the couple had been in the same class.

“We both got very shocked, neither me or my boyfriend could believe our eyes,” Amanda told The Local on Wednesday.

She said that the couple knew that they had gone to the same preschool, but that they were sure they had been in different classes. They hadn't recognized each other when they met for the first time last year, and they had no friends in common.

The photo was taken when Amanda was four years old and both she and Ali moved away from Hässelby shortly after.

“We have no memory of each other from our time in preschool.”

But now, 19 years later, they are a happy couple.

In a Facebook post, Ali wrote about the unusual discovery and published the class photo, which was soon liked and shared by Swedes across the country.

After several newspapers in Sweden including leading tabloid Aftonbladet picked up the story, the couple said they had received a large number of calls from friends and family.

“It was quite fun in the beginning, but now it’s starting to get a bit annoying. We’re not used to getting this much attention”, Amanda told The Local.

She said she believed the couple would not be driven apart by the fuss. Quite the reverse:

“This made us realize that we were meant for each other. Now I really believe in destiny.”