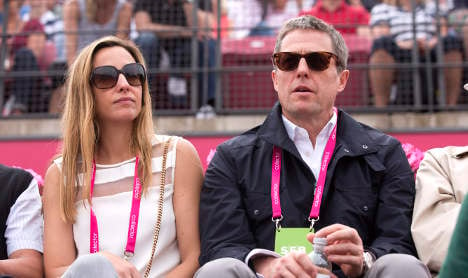 Anna Eberstein and Hugh Grant at the Swedish Open this summer. Photo: Björn Larsson/TT
Hugh Grant, 55, snapped up the six million kronor ($704,000) home on October 15th, paperwork shown to The Local by Lantmäteriet (the Swedish Land Registry) confirms.
The documents back up reports in Swedish newspaper Aftonbladet which broke the news of the sale on Thursday.
They show that the star bought five sixths of the 122 square metre property, with Eberstein purchasing the other one sixth.
Torekov is a seaside resort close to Båstad, one of the glitziest spots in Sweden, which hosts the Swedish Open tennis tournament each year.

The documents shown to The Local that confirm the sale
Photos of Grant's new home published by Aftonbladet show that it is all on one level, painted white and has a large lawn.
But while pictures of the property have been splashed all over the Swedish media, some residents of Torekov appear to be blasé about their new neighbour.
“He has been here many times before, during several years. So it’s not a big deal that he has bought a house here now,” Anette Bohlin, 58, told The Local.
“We are used to celebrities, there are a lot of them around here (…) Everyone minds their own business. So this is not a big sensation,” she added.

A tweet by Swedish tabloid Aftonbladet showing the property
However Bohlin did reveal one largely unknown fact about the A-lister: he is a fan of Sweden's most famous sweet snack.
“He bought cinnamon buns at the local café here every day last summer,” she said, noting that he also sometimes ate out in the town and “went swimming a lot” when he visited.
“My husband has met him several times, he’s a nice man,” she added.
Katarina Petersson, who runs Lotsen Mäklarhus, a major property firm in the town, told The Local that she had been fielding calls from journalists all day, but had not facilitated the deal herself.
“There are a lot of celebrities who live here and I can only say that it’s very positive for my business,” she said.
“Maybe he fell for the nature and the sea. The summers here are amazing.”
Other well known residents are understood to include Swedish singer Meja, who had a global hit in 1998 with the song 'All 'bout the Money', Swedish businessman Bertil Hult, and national football hero Henrik Larsson.

A couple buying pastries in Torekov. Did they spot Hugh Grant? Photo: Björn Larsson/TT
Grant had a son with Anna Eberstein, the daughter of Swedish Social Democrat politician Susanne Eberstein, in 2012.
It was reported earlier this month that the pair are expecting a second child.
Hugh Grant already has two other children from his relationship with Tinglan Hong. His daughter Tabitha was born in 2011, while Felix was born a year later.
The actor is not the first celebrity to demonstrate his love for Sweden in recent months.
In May, US rapper Wyclef Jean revealed that he fell in love with Sandviken in cental Sweden after a gig there and was planning a move to the town in the next couple of years.
Interviews by August Håkansson
Url copied to clipboard!