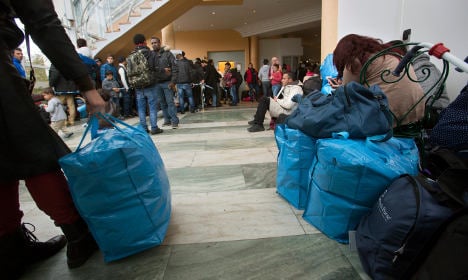 An official reception centre run by the Swedish Migration Agency in the Jägersro area of Malmö in southern Sweden had to be evacuated after a fire broke out on the first floor at 9.30pm on Wednesday.

A routine arson probe was launched into the blaze, which follows a series of suspected attacks on asylum accommodation across Sweden. However, there was no immediate indication that it had been started deliberately.

“There will be an investigation into the causes of the blaze, but not until [Thursday] morning. So far the cause is unknown,” Migration Agency press spokesperson Sophia Öhvall Lindberg told the daily.

Three people were taken to hospital to be checked over for smoke inhalation, but their injuries were not understood to be serious.

Just hours later, fire and rescue services were called out at 4am on Thursday to a home for at-risk youths in Tjörnarp near Höör, some 50 kilometres from Malmö, after a bottle of flammable liquid was lit and thrown through a window of the building.

Staff were able to put out the flames and no injuries were reported.

According to police the centre also provides home for refugee children arriving in Sweden without their parents.

“We have questioned staff and those living here, but have no suspects at the moment,” police control room officer Hans Nilsson told Sydsvenskan early on Thursday morning.

Police helicopters equipped with body heat cameras are now set to be launched to monitor refugee centres in rural areas following more than a dozen suspected arson attacks since the summer.

“It's important that people know that the police authority conducts surveillance at accommodation centres to prevent criminal activity,” Jonas Hysing, operative head at a national police unit for special incidents, told the TT newswire on Wednesday.