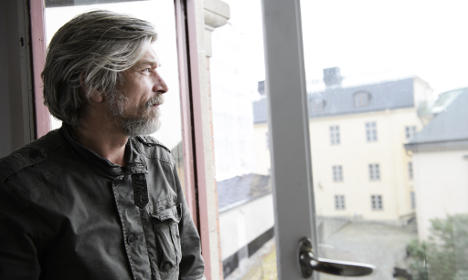 Norwegian writer Karl Ove Knausgård in Stockholm this week. Photo: Henrik Montgomery/TT.jpg
Norwegian writer Karl Ove Knausgård has been increasingly vocal about what he sees as the refusal of the educated middle classes in his adopted home of Sweden to face up to the realities of immigration.
“In Sweden, my impression is that the desire to be decent, which is in itself laudable, has given people an aversion anxiety against discussing many problems concerning integration and immigration,” he told Norwegian newspaper Aftenposten during a book tour.
“If you talk about the issues, it means you are somehow automatically critical of immigration.”
By contrast, he described the anti-immigrant Progress Party in Norway as a “blessing” for politics, arguing that societies must “dare to talk about the problematic aspects of immigration”.
“I do not agree with their views, but it is good that they are able to express them openly without being demonised,” he said.
Knausgård is a household name in Norway, best known for his 3,500 page novel My Struggle which was a sensation in Scandinavia when its six volumes were published between 2009 and 2011.
He moved to Sweden more than a decade ago to live with his partner the Swedish poet Linda Boström and has penned numerous articles challenging the policies of his adopted nation.
In May he slammed Prime Minister Stefan Löfven for describing Sweden's anti-immigration party – the Sweden Democrats – as a “neo-fascist party”.
“Everyone knows it isn’t true, but that doesn’t matter because if they think differently on such a sensitive question, they must be fascists,” he argued.
Knausgård said in his latest rant that the consequences of immigration depended on how much effort society was prepared to expend on the process.
“We know nothing about the consequences of immigration, but they are clearly entirely dependent on the resources used,” he said.
“The worst thing that can happen is ghettos, closed cultures developing inside the culture.”
He arged that in Stockholm at least, this had already happened.
“Stockholm is a divided city. The white middle and upper classes congregate in the urban areas, while the immigrants and working classes live in the suburbs,” he said.
“That same white middle class is in favour of immigration, but they have no immigrants whatsoever close to them in their personal lives, and they become furious if anyone expresses right-wing populist views.”
But the critic's controversial comments have received mixed responses.
Swedish writer Jan Guillou, speaking on Norway's state broadcaster NRK on Thursday night, dismissed Knausgård's attack on Sweden, saying he was a victim of the right-wing’s “delusion” that immigration could not be discussed in the country.
“Knausgård is probably one of the worst political analysts in Scandinavia,” he told NRK.
“God! Open debate? Over the last ten years this has been one of the main topics for discussion in Sweden. It surprises me that a man like Knausgård, who has lived in Sweden, is also a victim of this delusion.”
Up to 190,000 people are expected to seek asylum in Sweden in 2015, as the Nordic nation continues to take in more refugees per capita than most other EU member states.
The nationalist Sweden Democrat party gained 12.9 percent in the country's last general election and has recently been scoring around 20 percent in opinion polls. However a survey released last month suggested that most Swedes support their country's approach to immigration and are in favour of rising numbers of refugees.