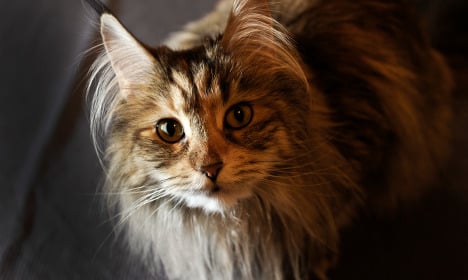 This is not the cat mentioned in the article. Photo: Anders Wiklund/TT

You could say that the unusual Swedish custody case, which was first reported by law magazine Dagens Juridik, began as far back as 2002, when a 12-year-old girl was given a three-month-old kitten by her mother and stepfather.

When she, a few years later, was unable to continue to care for the pet for health reasons, her mum and aunt, who the girl was living with at the time, asked her grandmother to take in the cat.

The now 76-year-old pensioner happily obliged. But when her grandchild later asked to have the cat back, after turning 20 and moving into her own apartment, the pensioner refused, saying she had become attached to the animal.

The younger woman took the case to Södertörn District Court in 2010, which ruled that the grandmother had had good reason to believe that she had been gifted the cat on a permanent basis.

However, the verdict was thrown out by the appeals court, Svea Hovrätt, which told the woman to hand the pet back to her granddaughter, now aged 25, reported Dagens Juridik on Thursday.

“The [grandmother] said that she loved the cat and did not want to give her back. The grandmother has known or has had reason to suspect that neither [the mother] nor [the aunt] were the true owners of the cat, and should at least have verified ownership. [The grandmother] has therefore not acquired the cat in good faith,” wrote the appeals court in its ruling.