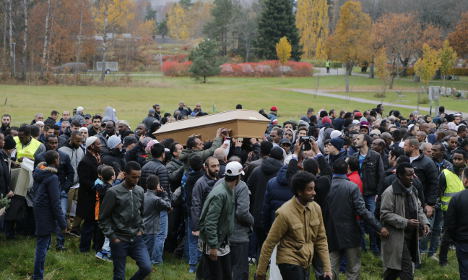 Friends and family of Ahmed Hassan. Photo: Adam Ihse/TT
Hassan's family asked for a quiet low-key memorial for the pupil, but large numbers turned up for the event at Håjums cemetery in the town on Friday, including Sweden's Education Minister Gustav Fridolin.
The teenager moved to Sweden with his parents three years ago after escaping violence in Somalia, his home country.
“I have fled the violence and believed I saw and experienced the worst. But this…it's hard to take in,” his father Mohamed Hassan told regional newspaper TTELA ahead of the funeral.
“Until last Thursday, we have never been afraid here,” he added.
The boy's uncle argued that everyone linked to the attack should be considered a victim, including the killer.
“We condemn the perpetrator's actions. But he was a human. And even though we are people with different skin colours, we have red blood in all of us,” he told the newspaper.
Hassan was given the grave next to murdered teaching assistant Lavin Eskandar who was buried on Wednesday, surrounded by 1,500 fellow pupils, teachers, friends and relatives.
“The terrorists killed Lavin, he was a kind person, he was nice to everyone. Go son, I'm proud of you,” said Eskandar's mother, Intesar Fares, in an emotional tribute during that service.
Both Eskandar and Hassan were killed after a sword-wielding masked man turned up at the Kronan school in the southwestern industrial town of Trollhättan last week.
Another pupil and a teacher who were also injured in the stabbings remain in hospital.
A cafe which is part of the school complex where the violence took place reopened on Thursday, for the first time since the deadly violence.
Staff and students who stopped by “hugged, cried a lot, talked and tried to grasp the situation”, Peter Asp, a spokesperson for Trollhättan council, told Swedish news aency TT.
Trained counsellors remain on hand at the school to offer support to staff and pupils, who are set to return to classes on Monday, following a scheduled autumn break this week.