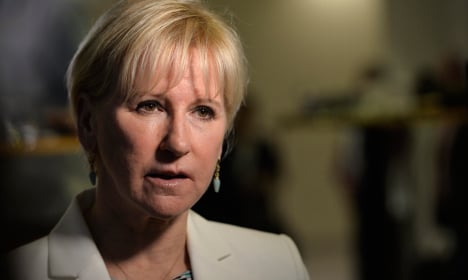 Wallström, who was deputy chairperson of the EU commission in 2004-2010, told the Dagens Nyheter newspaper that Sweden would be taking a tougher stance in summits in an attempt to secure financial support and help to accommodate the 140,000-190,000 asylum seekers the country is expected to receive in 2015.

Sweden is currently campaigning for other EU member states to take in a greater share of refugees fleeing violence in the Middle East and Africa. But the minister said negotiations have so far not produced the desired result.

“I have to admit that there have been moments recently of very great disappointment. I have heard statements from member states that have been completely astonishing and very discouraging,” Wallström said in the interview which was published on Friday morning.

An unprecedented number of people are expected to seek asylum in the Nordic nation in 2015 and while Prime Minister Stefan Löfven has widely praised his country's response to the crisis he has said that Sweden is “approaching the limit” of its reception capacity.

“I think most people feel that we cannot maintain a system where perhaps 190,000 people will arrive every year – in the long run, our system will collapse. And that welcome is not going to receive popular support,” said Wallström, echoing her Social Democrat colleague's comments.

Löfven is expected to push the same argument when he meets his UK counterpart David Cameron, leader of one of the countries reluctant to take in more asylum seekers, on Monday next week.

The meeting comes after representatives from six parties – the ruling Social Democrat-Green coalition and the opposition of the Moderates, the Liberals, the Centre Party and the Christian Democrats – agreed to request that the EU include Sweden in its refugee relocation scheme, alongside front-line states Italy and Greece, to ease the burden on the Nordic country.

Wallström told The Local in May that how the union manages the crisis is going to determine its record in the history books.

“What if we lived in a war zone? We would also want to flee somewhere safe with our children, or try to secure a future elsewhere. It has to do with whether or not we are serious in the EU about our guiding principles – this will affect our credibility,” says Wallström.