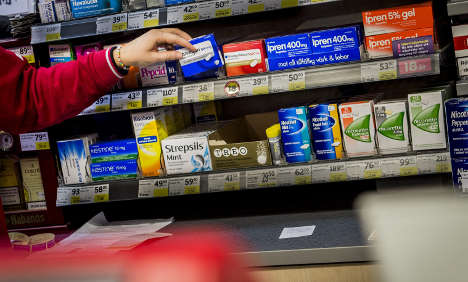 Paracetamol in a Swedish supermarket before the ban. Photo: Nora Lerek/TT
The ban comes into place on Sunday, five months after Läkemedelsverket, the government authority responsible for the approval and control of medicines, took the decision to ask supermarkets to stop selling the products. This followed a spike in cases of accidental poisoning and overdoses.
“We see a clear increase in the number of poisoning cases that are essentially self-destructive acts, namely impulsive acts where you know there is a connection with availability. When availability increased, so did this problem,” Rolf Gedeborg, a chief investigator at Läkemedelsverket, told Swedish tabloid Aftonbladet on Friday.
Sweden only introduced the sale of paracetamol tablets in supermarkets in 2009. Since then, figures suggest poisoning cases have gone up by 40 percent – from about 1,100 to just over 1,500.
Läkemedelsverket's decision has been a controversial one, with not everyone agreeing with the supposed link between the painkillers’ availability and the poisoning cases.
“You haven’t checked where people bought or got hold of their paracetamol,” Karin Brynell, CEO of the Swedish Grocers' Federation, Svensk Dagligvaruhandel, told TT when the ban was announced in April.
Paracetamol tablets will remain available at 1,500 pharmacies around Sweden, although a large proportion of them are closed during evenings and on Sundays.
“Stopping sales means little for the industry economically. Those primarily affected are rather consumers in rural areas. Those who are far away from the nearest pharmacy will suffer the most,” said Brynell.
The new ban only applies to tablets intended to be swallowed whole. Soluable pain killers and effervescent tablets will still be available in all the major supermarket chains.
“This is because tablets dominate self-destructive actions. It is hard to take in large amounts of effervescent tablets,” said Gedeborg.
Emelie Ericson, a spokesperson for ICA, one of Sweden's largest supermarket groups told The Local on Friday that there were no signs of panic buying in the Nordic nation ahead of the shifting rules.
“Since paracetamol tablets still will be available in pharmacies after November 1st, I don’t think there will be a rush to get them,” she said.