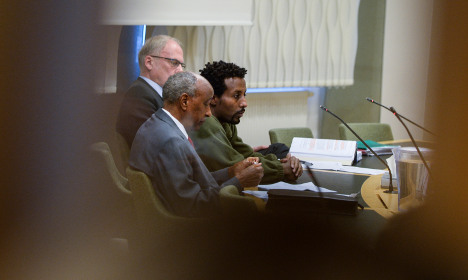 Abraham Ukbagabir sitting in the middle between his lawyer and interpreter. Photo: Pontus Lundahl/TT

It is likely that his life sentence will be reduced after a number of years in prison, as is customary in Sweden and he was told that he would subsequently be deported from the country.

A mother, 55, and her adult son, 27, died in the attack at the Ikea mall in Västerås on August 10th. Ukbagabir had admitted stabbing the pair using knives from the store, but said he did not mean to kill them.

But the judge Per Kjellsson told the courtroom that the act had been carried out with “indifference” to the victims' lives.

“In light of how he carried out the criminal act, and his emotional state as he himself has described it, is is clear that he was compelety indifferent as to whether or not his violence would lead to death for those two people he attacked,” he said.

The trial, which began at the start of this week, previously heard that the Eritrean, who had sought asylum in Sweden, had been handed a deportation order on July 27th and had again been told to leave the Nordic nation by immigration officials shortly before he carried out the attack.

He told the court that he lost control when he understood he would be forced to leave.

“I used to regard Sweden as my country. Then when I had this thought and got rejected I had to try to defend myself,” he said, via an interpreter.

After Friday's ruling, defence lawyer Per-Ingvar Ekblad told the Expressen tabloid that he was disappointed, and suggested he would be appealing the sentence.

He said that his client had been mentally unstable at the time of the attack, despite a psychiatric evaluation stating the opposite ahead of the trial.

“There is reason to assume that he has some kind of personality disorder. I assume that my client wants us to appeal the ruling,” he said.

The Ikea stabbings stirred tension in Sweden and saw police presence stepped up at asylum centres in the Västmanland region out of fear of retaliation attacks against the Eritrean community.

The victims' family, from Skellefteå in northern Sweden, have not spoken publicly about the loss of their loved ones, but said in a statement ahead of the trial that they did not want their deaths to be used as a “weapon” in an increasingly hostile immigration debate.

“We have lost a beloved daughter and mother and a beloved son and brother. They were at the wrong place at the wrong time. This terrible incident has been used as a weapon in the media and we strongly distance ourselves from that. We do not want it to be used in the debate about immigration and integration,” read their statement.