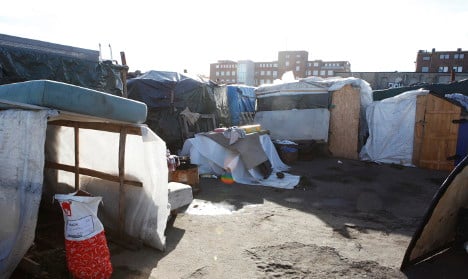 The camp on Tuesday. Photo: Drago Prvulovic/TT
The migrants have been living in tents, caravans, shacks and cars in an industrial area for months, sparking an intense debate in the city.
But Malmö's environmental committee said on Tuesday that the camp needed to be emptied and cleaned up and announced that residents had until 4pm on November 1st to either leave or face eviction by police.
Jeanette Silow, head of the committee, told Swedish media that the decision had been made to resolve what she called a “difficult situation” for others living nearby.
However the local council said that it would be creating a winter shelter with space for 40 people, to ensure that vulnerable people could be offered emergency accommodation.
As politicians met at Malmö city hall to finalize the details, around 50 of the camp's residents gathered outside to protest against the decision.
“The camp means everything to us. It is our home, this is where we live and eat,” Sonia Dumitru told the TT news agency.
Meanwhile Johanna Nilsson, a spokesperson for Sweden's Roma Rights Network (Nätverket romers rättigheter) also criticized the move.
“To make this kind of decision without offering a worthy place to direct people to (…) clearly shows that you are not interested in finding a long term solution – neither for these Roma people nor the city as a whole,” she said.
Under Swedish law both locals and visitors alike currently have the right to walk or camp on almost any land, although this does not include public land that is adjacent to residential property or privately-owned gardens.
The case of the camp in Malmö is unique because the person who owns the land tolerated the migrants –who are mainly Roma people from Romania and Bulgaria – for six months before launching a trespassing case with police.
Sweden's national government recently announced it was set to appoint an investigator to review the country's regulatory framework for eviction.
Some municipalities in other parts of Sweden have already evicted groups of Roma from public land including in the capital, Stockholm.