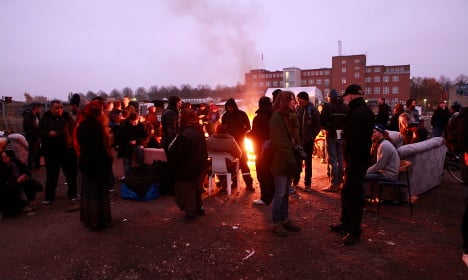 At 5pm on Sunday, the camp had still not been cleared. Drago Prvulovic / TT

Despite the no-show from authorities, rumours circulated that the eviction would take place early on Monday morning.

However, Lars Förstell, information director for Skåne police, told Swedish newspaper Aftonbladet, “I don't understand the word 'postpone'. 4pm was simply the earliest we could clear the camp. It is the municipality’s business and we will assist them should they require us.”

The migrants have been living in tents, caravans, shacks and cars in an industrial area for months, sparking an intense debate in the city.

According to Radio Sweden (Sveriges Radio) around half of those in the camp, approximately 75 people, had left by 3pm.

But others refused to go and were joined in support by demonstrators outside the camp.

Simona Tegman of the Network for Roma Rights (Nätverket romers rättigheter) told the Swedish news news agency, TT, “We want to have a peaceful demonstration, a sit-down.”

Malmö is offering accommodation for five nights for around 50 people, said local councillor Carina Nilsson. The city is also trying to find help for the migrants in their home villages in Romania.

Last Tuesday, Malmö’s environmental committee decided that the camp needed to be emptied and cleaned up and announced that residents had until 4pm today to either leave or face eviction by police.

On Saturday, the Swedish government’s national coordinator for vulnerable EU citizens, Martin Valfridsson, told Sveriges Radio that there should be zero tolerance for those who camp on private or public property.

“The state must support the municipalities in a very difficult situation,” Valfridsson said. “Police and private property owners have great difficulty with this situation. I think there should be zero tolerance for those who live without permission on all land in Sweden.”

“You can’t give special treatment to any group in society,” he says. “We have no national roof-over-your-head guarantee. In large cities we even evict families with children who can’t pay their rent.”

Under Swedish law both locals and visitors alike currently have the right to walk or camp on almost any land, although this does not include public land that is adjacent to residential property or privately-owned gardens.

The case of the camp in Malmö is unique because the person who owns the land tolerated the migrants – who are mainly Roma people from Romania and Bulgaria – for six months before launching a trespassing case with police.