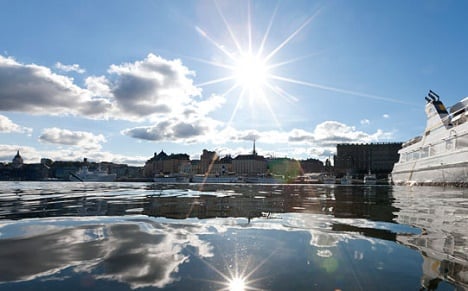 The channels and waterways of Stockholm are clean enough to fish in, and residents regularly swim off the coasts of Södermalm and Kungsholmen. But just a few kilometres away, at Henriksdalsberget, researchers are producing the cleanest water in the world.

Hammarby Sjöstad is known for being technologically and environmentally advanced. It was designed with the environment specifically in mind. The decision to focus on the environment in this part of the city was made long ago, in 1996. The buildings, the traffic, and all technical installations would be as environmentally friendly as possible, local politicians decided.

The district utilizes space heating, water heating, and geothermal heating, and many of the buildings have solar panels on the rooftops. Some 600 apartments in Hammarby have biogas stoves, with gas straight from Henriksdal sewage plant. Parking spaces are limited intentionally. Carpooling is highly encouraged. Bike paths meander through the entire district. And then there's Hammarby Sjöstadsverk, a small but unique facility for the testing and demonstration of innovative waste water purification.

The facility is owned and operated by a consortium lead by the Royal Institute of Technology (KTH)and IVL Swedish Environmental Research Institute. It is used for both long-term national and international research programs/projects and consultancy, testing and development for the industry and other partners.

The massive hall bubbles with vents and tubes. Anyone who enters the facility must wear a white protective labcoat. The facility is just a bit bigger than a football field, and it was supposed to be shut down about eight yeas ago – but devoted researchers from KTH and IVL decided it was worth something. Today it is used for R&D in water purification. Of course, there are many ways of purifying water. One way is to filter the water under pressure through a membrane. Another way is t use osmosis. The problem is that usually the water just becomes almost clean – not entirely clean, since the pores in the membrane cannot be too small to let the water through. The process also requires huge amounts of energy.

Alternatively, waste water can be boiled and distilled. The water gets cleaner – but still not entirely clean.

Or water can be treated multiple times, first boiled, then filtered, and then cooled quickly from the filtered, clean steam on the other side.

The process is known as membrane distillation – MD . That's wht Andrew Martin is doing at Sjöstadsverket.

“With Membrane Distillation, we can achieve what we call ultra-clean water,” Martin explains. A membrane at the facility.

The membrane distillation line consists of 10 modules that can be run in any combination at various temperatures for concentration of fluxes or production of ultra pure water. The line is connected to the district heating network, but also has its own heating and a closed system for liquid recirculation.

But how clean is ultra-clean?

“It's a question of definition,” Martin admits. “Of course there are limits even here. There are particles which can sneak by. But ultra-clean water is clean enough to be used in a number of industrial processes, such as in nuclear facilities, where even small amounts of minerals in the water can cause corrosion.”

Ultra-clean water can also be used to purify water contaminated by medicines – and Martin is involved in a project with Astra Zeneca to do just that.

Unfortunately, the process is extremely expensive. It's costly to first heat the water and then cool it down again, and one cubic metre of membrane distilled water costs 15 kronor. Some sectors are willing to pay that price – for instance computer manufacturers producing tiny chips which require ultra-clean water.

“There are concerns about if today's water purification methods are enough for the future of microchips. The MD technique is a great alternative solution,” Martin explains.

But Martin and the team at Sjöstadsverket hope to expand the uses of the water.  Martin's goal is to make the process cheaper and easier, using only a fraction of the energy. One way would be to utilize the heat left over from other processes instead of heating up the water separately.

Martin says that if all goes well, membrane-distilled water could be the answer to many problems in developing countries as well.

“It could be the solution for countries in the third world which are still struggling with contaminated ground water,” Martin says.

Based off of the Swedish article here.