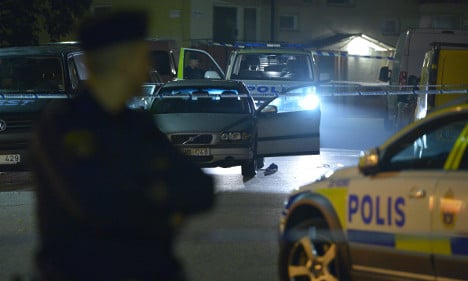 Police investigate a shooting in Rågsved, Stockholm, in 2014. Photo: Johan Nilsson/TT
Gun crime in major Nordic cities is in focus after a study by Swedish public broadcaster SVT, which looked at shooting figures in the Danish, Finnish and Norwegian capitals as well as Stockholm, Gothenburg and Malmö in Sweden.
Researchers analysed official data for the period between January 2010 and the end of June this year. They noted that 189 people had been injured in Stockholm, alongside 109 in Gothenburg and 63 in Malmö.
By contrast, Oslo and Copenhagen reported just 30 injuries each linked to gun crime, despite having slightly larger populations than Gothenburg, which is home to around half a million people. Only 10 people were hurt in shootings in Helsinki.
The research follows a wave of high-profile attacks in Sweden in 2015, including a shooting at a restaurant in Gothenburg in March which made global headlines after two people died and eight others were injured.
Malmö has also experienced an especially violent few months with rising numbers of shootings and one explosion a week on average during the spring and summer. Sweden's Prime Minister Stefan Löfven visits Gothenburg after a pub shooting in March 2015. Photo: Björn Larsson Rosvall / TT
Amir Rostami, a leading authority on Sweden's organized crime groups based at Stockholm University, told The Local on Monday that he believes SVT's figures demonstrate an ongoing shift towards gang-related violence.
“This is part of a wider development in society that we have had in Sweden regarding gangs and organized crime during the past 20 or 30 years (…) If you see official crime data, many crimes are reducing, but when it comes to violence connected to gangs, this is actually going upwards,” he said.
“Violent crimes in the past were impulsive actions, but we see now they seem to be part of long-term conflicts between gangs and that is quite worrying (…) it is becoming more acceptable to use a gun to solve problems.”
Gothenburg police chief Robert Karlsson confirmed to SVT that his officers were increasingly investigating gang-related activities.
“We have, unfortunately, a number of conflicts raging, and we do not really know where it is all going,” he said.
SVT's study shows that alongside large numbers of injuries there are also far more deaths from gun crime in Sweden than elsewhere in Scandinavia.
In Stockholm, 21 people were killed between 2010 and June 2015. 17 people died in Gothenburg and seven in Malmö over the same period. By contrast, Oslo, Copenhagen and Helsinki recorded 11 deadly shootings between them.
Rostami argues that Swedish police “need to be more creative” when it comes to tackling organized gangs and points to initiatives taken in Norway which have encouraged rival members to engage in dialogue with one another.
“You need a very comprehensive approach by the law enforcers to resolve the conflict (…) and stop gangs recruiting in the future.”
Sweden's Social Democrat-Green coalition has promised to crack down on gun crime in the Nordic nation by increasing police resources and working to remove guns from the country's streets.
“Our society has been marked by horrific acts of violence recently,” said Prime Minister Stefan Löfven in a keynote summer speech.
“Although statistics show that security has increased and that crime against individuals has decreased in the last 10 years, we cannot have organized crime that terrifies families,” he said. 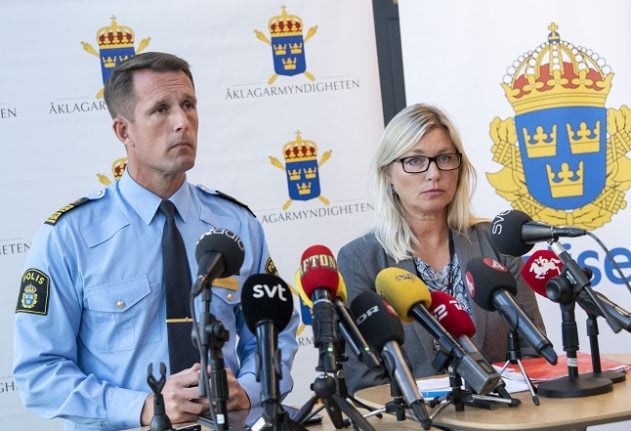