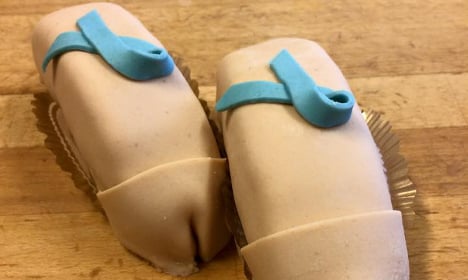 These unusual-looking Swedish pastries have been created for a good cause. Photo: Hanna Larssons Konditori

Hanna Larssons Konditori launched its new addition on Monday morning, adding to the assortment of cinnamon buns and other traditional Swedish breads and cakes more commonly found on its shelves.

By the afternoon the penis pastries were already going down a storm. The Expressen tabloid reported that customers had picked up some 50 of the sweets before noon and shop assistant Linda Thoresen told The Local that she had sold “maybe 20 or 30” since she had started her shift just after lunch.

“They have been very popular. It's a bit unusual and people have laughed at them and thought they were funny,” she said.

The pastries, which contain whipped cream and passion fruit mousse on a sponge cake base, can be snapped up for 25 kronor ($2.94) a piece, five kronor of which will be donated to prostate cancer research.

News of the unusual sweet spread fast on Monday. Just hours after the cafe opened, one of its Facebook posts depicting the treat had been shared several hundred times.

Thoresen, who admitted she had not yet tasted the pastries, revealed she had spent a large part of the afternoon fielding calls from journalists across Sweden.

“Oh, it's been newspapers and radio…but it's great that [the campaign] is being noticed,” she said.

Prostate cancer is one of Sweden's most common cancers, affecting around 10,000 men every year.

Last year the Swedish Movember Foundation, which encourages men to grow moustaches to raise awareness of the illness, raised around three million kronor.