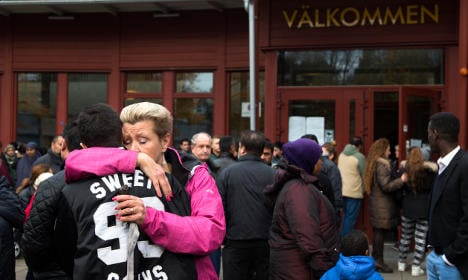 In some ways it was just like any other morning at the Kronan school in Trollhättan as it opened its doors to pupils returning to classes after a scheduled annual autumn break. But stepped-up security outside the building showed life was still a long way from returning to normal in the town's Kronogården area.

“We have spent the whole break trying to talk, trying to forget,” Omed Siddige told the TT newswire as he watched his daughter Sahar, who is in second grade, walk through the same doors through which killer Anton Lundin Pettersson brought his fatal weapons 11 days ago.

“I'm going to stay here until she comes out again,” he added.

Police classified the attack as a hate crime after CCTV footage showed that Lundin Pettersson, a 21-year-old with far-right anti-immigrant sympathies who was fatally wounded by officers arriving at the scene, selected his victims on the basis of their skin colour.

And Siddige, a father-of-four, says he no longer feels safe in Sweden, where he arrived with his family after fleeing violence in Afghanistan in 2003.

“We have to move from Kronogården. I don't feel that my children are safe here.”

Police at the Kronan school on Monday. Photo: Thomas Johansson/TT

One of Sahar's fellow pupils and a teaching assistant were killed in the October 22nd stabbing, which shocked the country and sparked a debate about security at schools across Sweden.

“It is impossible to protect yourself from an incident such as this, but one question for the future is how open we dare our society to be. This was an attack on the entire country,” Paul Åkerlund, chairman of Trollhättan Council, told TT on Monday.

Representatives from social services and trained counsellors were present at the school, welcoming pupils with warm hugs and offering support.

“We are here for the children and we ask how they are feeling,” said counsellor Anna Wetterlind.

The funerals of the teaching assistant and pupil killed in the stabbings took place last week, with thousands of friends, family, staff and pupils turning out to remember Lavin Eskandar, 20, and Ahmed Hassan, 15.