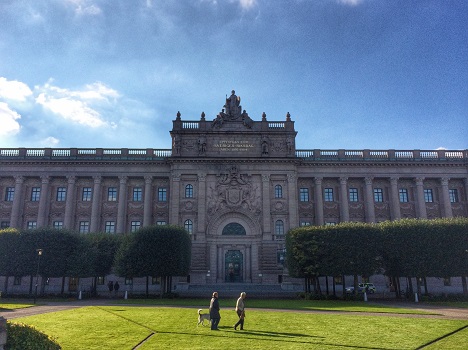 On November 2 the Swedish Institute organized a study visit to Riksdag, or, in English, the Swedish parliament. I really enjoyed participating in this amazing event. First, it was an excursion in the building of the parliament, and we got to see the main hall where debates and voting are conducted. The thing that is quite unusual is that the seats in the parliament’s hall are assigned according to parties and constituencies instead of right and left as in the majority of states. Open debates are conducted there, and everyone has the right to attend the debates. There are about 1000 journalists accredited to report the work of the parliament. According to Act of Transparency, all information of political processes must be under free access.

They say there are three main powers in Sweden: parliament, government and media.  No one asks where the information came from: publications, which are primarily private ones, are responsible for published information.

Sweden has multi-party system. Socialdemokraterna has the current parliamentary majority with 113 seats. Parliamentary elections are held every four years. The king has no political power; he is formal Head of State, but still he has the right to vote in general elections. An interesting fact is that the most common backgrounds among members of parliament are teachers and nurses. Currently the youngest member of parliament is 21 years old, generally the youngest one ever was 18 years old.

I find the following statement explains the work of Swedish parliament quite well:“communicate to make everyone a bit happy.”

After lunch we went to a workshop held by Annika J Åkerberg from Civil Rights Defenders. The main topic of the workshop was Swedish laws, UN and European conventions that contain human rights regulations, their implementation in Sweden, and the opportunity of citizens to make an impact on solving human rights problems.

We also discussed the presence of organization that can help to regulate such issues in different countries and the role of the United Nations. Unfortunately, even though the international mission of the UN or Civil Rights Defenders or another institution detects violations and assaults, the local government reaction can be very slow and the effect still negligible in a global context.

Considering the fact that participants were from different countries mostly outside of the EU, and where the problem of human rights violations is acute, the discussion was very interesting.

I am thankful to SI for organizing such a useful event.