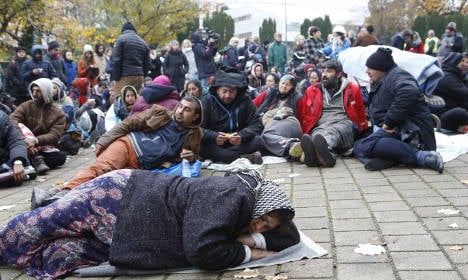 Around 30 police officers turned up at the camp at around 5am on Tuesday. They first removed protesters who were blocking the entrance using mattresses and then headed inside to ask the camp's residents to leave amid a tense atmosphere.

One of the migrants at the camp, who gave his name only as Samuel, said police had used violence in some cases.

“It was an intimidating atmosphere from the beginning. They surrounded us, began dragging away people, dragged them through the gravel. Those who they thought were resisting were punched,” he told TT.

He said that the activists themselves had been carrying out a peaceful protest and had not resisted the police.

However one police officer was reported to have been hurt in the chaos and an injured activist was treated by paramedics at the scene.

One person was arrested, according to TT. Some of those protesting the closure of the camp subsequently continued their campaign outside Malmö City Hall.

“I think it is terrible what is happening here. Those rejected have nowhere to go,” said Maria Persdotter, a Swedish activist who is researching how members of the Roma community are being treated by Swedish politicians.

But Prime Minister Stefan Löfven told TT that the responsibility for ensuring the EU migrants have roofs over their heads remained with Romania and Bulgaria, where most of them are from.

“They are of course welcome to come here and spend some time here, but in the long run their own countries have to ensure they get work, education and a place to live in their country,” said the Social Democrat leader.

“Of course it's a tough situation for those who today don't really know where they will go. We can offer evacuation homes and support to help them return to Romania,” she told TT. Police at the camp on Tuesday morning. Photo: Drago Prvulovic/TT

The camp was home to around 200 people, but last week Malmö city council’s environmental committee ruled that it posed a health risk to both those living there and neighbouring residents. It asked people to leave the camp by 4pm on Sunday or face eviction.

However, police failed to show up over the weekend with some of the residents deciding to stay on beyond the deadline until the camp was cleared on Tuesday.

Under Swedish law, locals and visitors alike usually have the right to walk or camp on almost any land, although this does not include public land that is adjacent to residential property or privately-owned gardens.

The case of the camp in Malmö is unique because the person who owns the land tolerated the migrants for six months before launching a trespassing case with police.

Malmö city council is offering accommodation for five nights for around 50 people from the closed camp and is trying to find help for the migrants in their home villages.