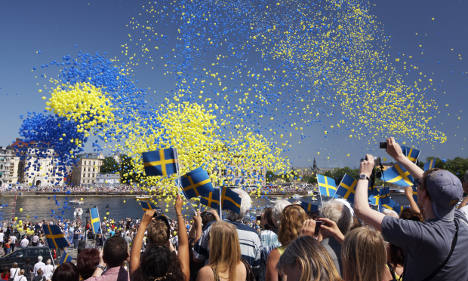 Swedes celebrating their National Day. Photo: Ola Ericson/Image Bank Sweden
Swedes topped the table produced by global language training company Education First (EF), which looked at the language abilities of more than 910,000 adult learners in 70 countries around the world.
The Scandinavian nation was given an overall score of 70.94 out of a possible 100 in EF's English Proficiency Index, following a result of 67.8 last year.
The move means that Sweden regains its crown, after Denmark took the top spot in the index last year, a position that Sweden had previously held in 2012 and 2013.
But EF was quick to argue that both Nordic countries remain positive examples for the rest of the world.
“Basically Denmark didn't fall, it was just beaten. Denmark has actually increased marginally, it's just that Sweden is doing better,” the company's vice president, Christen Bagger, told The Local.
“Obviously there is a bit of national pride to it all. But it's more that Sweden has performed better and Denmark is not worse,” he added.
Sweden's other Nordic neighbours Norway and Finland scored fourth and fifth spots in the table, while the Netherlands came second.
But larger European countries including Italy, Spain and Hungary failed to make the top 20, while France languished in 37th place.
For the first time the study also revealed the connection between countries' English levels and their achievements in innovation, by looking at metrics such as technology exports and spending on research and development.
“Countries with higher English proficiency have more researchers and technicians per capita,” said the report.
“The ability to learn from the research of others, participate in international conferences, publish in leading journals, and collaborate with multinational research teams is dependent upon excellent English,” it concluded.
The report also found that correlations between countries' English ability and Gross National Income per capita, quality of life and internet connectivity remained strong and stable.
EF's study comes amid ongoing debates in Sweden surrounding the growing use of English in the workplace, as the country seeks to attract global talent to both large Nordic companies and emerging startups.
Last week a study looking at some of the most successful Swedish startups concluded that introducing English as a company language as early as possible and hiring least one non-Swedish employee within the first 12 months were key ingredients for companies seeking international success.