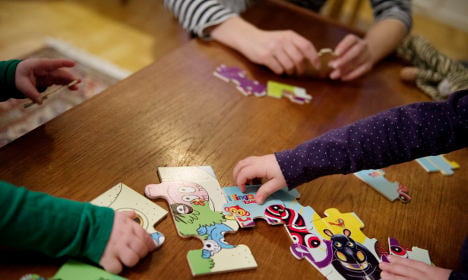 Swedish parents get paid up to 80 percent of their salary for looking after sick children. Photo: Jessica Gow/TT

Sweden's notoriously generous welfare politics include paying out at least 80 percent of a salary to parents who stay at home to look after their children if they are ill. It is called 'VAB', which stands for 'vård av barn' (care of children).

But it seems the idea has become a little too popular, according to a report by Sveriges Radio on Tuesday. Sweden's Social Insurance Agency (Försäkringskassan) investigated 1,417 parents wrongfully claiming benefits payouts in the first nine-and-a-half months in 2015, compared to only 1,202 over the whole of 2013.

A joint police operation at the ferry terminal in Helsingborg last month saw one dad getting caught returning from a trip to Germany – a popular route among booze cruising Swedes trying to score cheaper alcohol on the continent – instead of being at home caring for his sick child, for which he was claiming 'VAB' payments.

He was let go with a warning after withdrawing his benefits claim, but Peter Fausö, head of the agency's control department responsible for hunting down the suspected cheats, told Sveriges Radio such incidents are not uncommon.

“We have those ferry controls in Helsingborg where we sometimes run into parents who have been shopping in Germany,” he said.

But Niklas Löfgren, family economics spokesperson at the Social Insurance Agency, told The Local that journalists should not jump to the conclusion that Swedish parents are getting greedier. Instead, he said the rise is likely caused by the agency stepping up its work to crack down on benefit crimes.

“On top of doing randomized checks, we now carry out systematic controls using certain criteria that point in the direction of potential offenders. (…) It is not totally uncomplicated and we can't reveal the exact method because then it may no longer work,” he said.

The punishment for parents caught making erroneous claims ranges from a simple warning to prison terms for the hard offenders. In the past few years, around 20-38 percent of reported benefit crimes have resulted in a conviction.

Most of the offending mums and dads were told to pay back the cash after the agency found out they were working while claiming payouts for looking after sick children, which is not allowed.

As The Local reported in April, 733 parents in total were forced to repay 14.8 million kronor in erroneous payouts in 2014, compared to the year before when 472 parents paid back 5.8 million.

One parent was told to pay back 1.1 million kronor, an unusually high figure. The second highest last year was less than half of that, and the average was 6,300 kronor per parent.

“It's important to note that most people do behave,” said Löfgren. But when asked about some of the strangest claims the agency has received he added: “We did have one person last year who asked why she wasn't allowed to claim 'VAB' to look after her dog. But, no, that didn't work.”