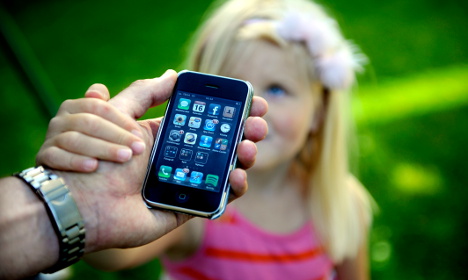 Should Swedish parents put away their smartphone while looking after their children? Photo: Erik Mårtensson/SCANPIX

Around 1,500 children have to be taken to hospital every year after accidents at swimming pools. Meanwhile, one in ten fatal child drownings in Sweden takes place at a water park, according to the Swedish Life Saving Society.

The public swimming pool in Umeå caused a splash last week when it issued a complete ban on smartphones, tablets and e-readers in its building, accusing the tech-loving Swedes of spending too much time hooked up to social media and not enough keeping an eye on their children.

“It's mostly for security. We don't anybody to drown,” council official Patrik Samuelsson told the TT newswire at the time.

On Tuesday, several other pools across the Nordic country followed suit. Anne Asterhäll, head of Holjebadet in Olofström in southern Sweden, said she often found parents accompanying their children to swimming classes with their nose pressed to their screens.

“In many cases it's about accidents that happen in a second, like children slipping and hitting their heads, and you can't prevent that. (…) But because it's about security we still want to urge parents to direct their attention towards their child,” she told Sveriges Radio.

And in Jönköping, in central parts of southern Sweden, the head of the council's culture and leisure department, Karin Semberg, told public broadcaster SVT his staff were also mulling introducing a ban by the end of 2015.

“A ban is always a shame, but the children are the dearest thing we have. (…) Sure, you can lose focus [reading a book] as well, but as our social media presence increases and you have to be constantly updated – it could result in an unhappy ending,” she said.

Swedes are some of the most frequent mobile phone users in Europe with three quarters of the whole population having access to a smartphone, according to recent research by Gothenburg University.

Meanwhile, a total of 11 children have so far died in drowning accidents in the first ten months of 2015, according to The Swedish Life Saving Society. The group welcomes the swimming pools' moves to get Swedish mums and dads to log off and spend more time away from their smartphones.

PARTNER CONTENT
Working from home? Have you considered your ‘tech blind spots’?
Url copied to clipboard!