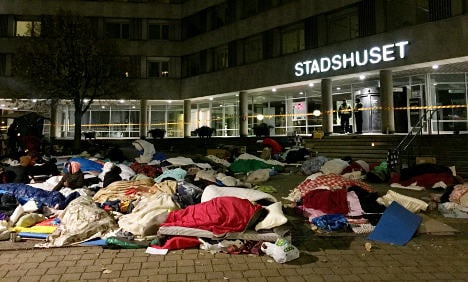 The migrants were among around 200 people – mostly Roma people from Romania and Bulgaria – who had been staying at a controversial shanty town in an industrial area of Sweden’s third largest city.

The camp was cleared on Tuesday amid concerns that it posed a health risk both to those staying there and neighbouring residents.

Dozens of campaigners joined a group of the migrants in protesting late into the night outside Malmö city hall, with around 40 Roma people subsequently sleeping on mattresses and rugs outside the building.

Police have told Swedish media that they are currently categorizing the migrants’ activities as a peaceful “demonstration” and are therefore taking no action. However this could change if the mood becomes violent or if the protesters set up shelters and tents in the area.

“It has been a cold night outside city hall,” said Johanna Stenberg, a reporter for Swedish public broadcaster SVT, on Wednesday morning.

“Most people tell me that they intend to stay as long as possible in protest (…) despair is great here.”

The migrants are legally allowed to stay in Sweden as they are EU residents. Sweden’s Prime Minister Stefan Löfven joined the debate on Tuesday, arguing that the responsibility for ensuring that they had roofs over their heads remained with Romania and Bulgaria, where most of them are from.

“They are of course welcome to come here and spend some time here, but in the long run their own countries have to ensure they get work, education and a place to live in their country,” the Social Democrat leader told the TT news agency.

“Of course it's a tough situation for those who today don't really know where they will go. We can offer evacuation homes and support to help them return to Romania,” she said. The camp, which was bulldozed on Tuesday. Photo: Erland Vinberg/TT

Stjernfeldt Jammeh told TT later on Tuesday that around 40 people from the closed camp had chosen to stay in emergency accommodation being provided by the local authority for five nights, while around 20 had decided to go back to their own country.

“We’re doing individual assessments, but it is likely that those who want it [help to return home] will get it,” she said.

Under Swedish law, locals and visitors alike usually have the right to walk or camp on almost any land, although this does not include public land that is adjacent to residential property or privately-owned gardens.

The case of the camp in Malmö is unique because the person who owns the land tolerated the migrants for six months before launching a trespassing case with police.