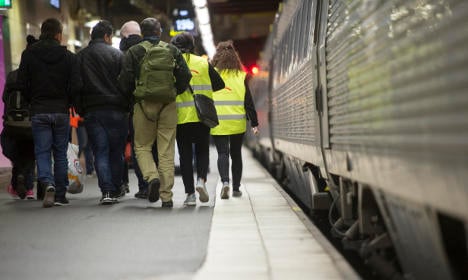 Refugees arriving Stockholm in October. Photo: Fredrik Sandberg/TT
Sweden's Prime Minister Stefan Löfven released a written statement on Wednesday asking the commission to push other EU member states to do more to help tackle the refugee crisis.
“Sweden has long taken an unreasonably large responsibility in comparison with other countries in the EU, and now we are in a very tight position. It is time that other countries now take responsibility and therefore the government requests the redistribution of refugees from Sweden,” he said.
The EU has already launched a refugee relocation programme designed to move refugees from overstretched frontline states.
Sweden has previously offered to take in some of this number and in early October received a group of Eritrean asylum seekers who had been living in Italy.
However, the country has since doubled its refugee forecast for 2015, with up to 190,000 new arrivals expected on Swedish soil before the end of the year.
The original EU plan was also to have seen 54,000 migrants and refugees relocated from Hungary. But several eastern European states, including Hungary, rejected the compulsory quota plan out of hand, with Sweden now keen to take advantage of the offer made to Budapest for relocating some of its own asylum seekers.
“We reached a point where we cannot receive people in the way that we want to do and the way we were used to,” Löfven later told a news conference in Stockholm with European Council President Donald Tusk.
Tusk expressed understanding of Sweden's position, saying it made sense to offer such support.
“Sweden is the most affected country in Europe when it comes to refugees and asylum seekers per capita. Because we have this reserve, because of the Hungarian decision, I'm absolutely sure that Sweden deserves this support from our side,” he said.
The Swedish government a fortnight ago reached a deal with the country's major opposition parties following rising concerns about the country's ability to handle the rising numbers of new asylum seekers. The politicians agreed that some of the incoming refugees should be given temporary rather than permanent residence permits.
Following the cross-party talks, the politicians also agreed to make it mandatory for all local authorities to take in a share of refugees, as some reported being unable to cope with the swelling numbers of new arrivals. A 10 billion kronor grant is to be shared between Sweden's councils in 2015 to help them cope with the influx.
Last year Sweden took in more asylum seekers per capita than any other EU country and it remains among the member states with the highest proportion of refugees in relation to its population, as the continent continues to struggle with a massive influx of migrants.