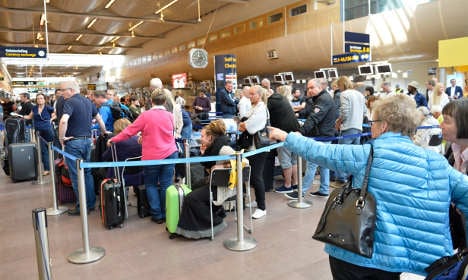 Holidaying in foreign nations is becoming increasingly important to the Swedes, according to research by pollsters Novus on behalf of Swedavia, the organization that manages Sweden's airports.

“They say in the survey that they want more time for their family, they feel that their daily life is stressful and they want to get away to recharge the batteries,” market director Elisabeth Axtelius told the TT newswire on Wednesday.

One in four of the 2,229 respondents told interviewers they had spent more than 50,000 kronor ($5,840) on holidays beyond the borders of Sweden in the past year. And 29 percent said they were planning to splash out even further in the next 12 months.

But despite Sweden's reputation as top in the world for work-life balance, with its generous holiday allowances and (some) companies even enjoying six-hour working days, 47 percent of Swedish tourists admitted they were travelling abroad to escape their “stressful life”.

A total of 59 percent said they went on holidays to spend quality time with their partner and family, while only 11 percent travelled to meet new and interesting people.

Meanwhile, as The Local reported last month, foreign tourists are in turn flocking to Sweden enjoy the Swedish lifestyle.

“There are two strong incentives for tourists to come here. Partly it's the genuine, unspoiled nature, and partly it's our Swedish lifestyle,” Thomas Brühl, chief executive of tourism organization Visit Sweden, told TT in October.

Tourists travelling to the Nordic country from abroad spent a total of 387,000 more nights in Swedish hotels, hostels and guest houses during June, July and August than in the same period last summer, according to the Swedish Agency for Economic and Regional Growth.

Foreign visitors have also been able to get more kronor for their dollars, pounds and other currencies this summer, which in turn is believed to have contributed to the hike.

While a year ago $100 for example would have bought you around 700 Swedish kronor, visitors were able to cash in the same amount for well over 800 Swedish kronor this summer.

Are you planning on travelling abroad to escape the Nordic winter darkness? Don't, instead read The Local's guide on how to embrace November in Sweden!