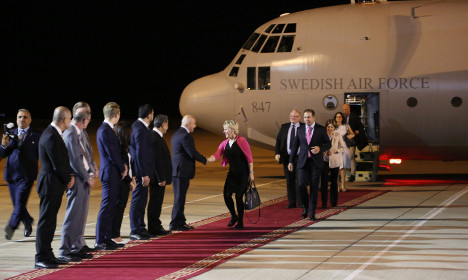 The troops arrived in Iraq in August and this week received a visit from Sweden’s Defence Minister Peter Hultqvist alongside Foreign Minister Margot Wallström.

Hultqvist told Swedish newspaper Dagens Nyheter (DN) on Thursday that he was “extremely proud” of the work that his country’s forces were doing to fight extremism and said he wanted the soldiers to stay on until the end of 2016. They had previously been expected to complete their work this year.

The idea will need to be discussed with opposition parties in the Swedish parliament before the government makes a final decision.

However Hultqvist told DN that he believed the troops were of “great importance”. He explained they had been helping to educate minority Kurdish soldiers on a range of measures from urban warfare to healthcare and protecting themselves against chemical weapons.

“This initiative is extremely meaningful (…) I feel extremely confident that it is right to continue,” he said.

The move to extend the mission comes despite earlier concerns that Sweden’s presence in the region could raise the threat level against the Nordic nation.

Thomas Hegghammer, a terror expert at the Norwegian Defence Research Establishment, told news agency TT in March that he was worried Isis could feel more threatened on the ground in Iraq or Syria, which “could motivate someone to carry out violent acts to protest”.

Reacting to the news of the initiative on Wednesday, Erika Holmqist, a security policy analyst at the Swedish Defence Research Agency told TT that Sweden's efforts represented “just the tip of the iceberg” in terms of trying to resolve the ongoing violence in Iraq.
“This is a bit like putting a plaster on a wound when it requires considerably more effort. But on the other hand, we hope that this is is heading in the right direction, and this is what Sweden can contribute,” she added.

The number of Swedes fighting alongside Isis is increasing slowly. Sweden’s Intelligence Service Säpo said last month that up to 300 Swedes are believed to have travelled to the region to fight in the past three years.

Around 40 are thought to have died in battle and around 125 currently remain in Syria and Iraq – 90 men and 35 women.

According to the United Nations, around 10,000 people have been killed in Iraq since 2012, while more than 3.2 million have been displaced.